Mexico, U.S. Will Continue Cooperation to Fight Abuses Against Workers, Regardless of National Origin or Immigration Status

WASHINGTON – The U.S. Equal Employment Opportunity Commission (EEOC), the U.S. Department of Labor and several other U.S. government entities on Thursday signed an agreement with the embassy of Mexico to advance the protection of the rights of Mexican and Mexican American workers in this country.

Charlotte Burrows, Chair of the EEOC, Secretary of Labor Martin Walsh, Mexican Ambassador to the United States Esteban Moctezuma and other officials signed a renewal of the memorandum of understanding (MOU) between the government of Mexico and the government of the United States to collaborate on protecting the rights of people of Mexican origin working in this country.

The signing of the agreements is also a sign of the broad commitment of both governments to open dialogue and cooperation in the framework of the application of U.S. labor laws in key sectors such as the agricultural industry and the processing and packaging of protein, as well as the commitments acquired in the United States-Mexico-Canada Agreement (USMCA), a tri-national trade agreement. This commitment was expressed in a communication by Ambassador Moctezuma to Secretary Walsh last May.

“Today’s agreement with Mexico cements the EEOC’s commitment to ensure that immigrant employees, regardless of their immigration status, understand that they are protected under our laws,” said EEOC Chair Burrows. “They have the right to be treated fairly and to be free from discrimination at work. Allowing employment discrimination to persist lowers the bar for all.”

The renewed agreements included a joint declaration in which both governments expressed their intention to continue strengthening their cooperative relationships to promote a better understanding of U.S. labor and employment laws by Mexican workers and their employers. Besides the EEOC and DOL, the partnership agreements were renewed with Occupational Safety and Health Administration, the Wage and Hour Division of the Department of Labor, and the Office of the General Counsel of the National Labor Relations Board. 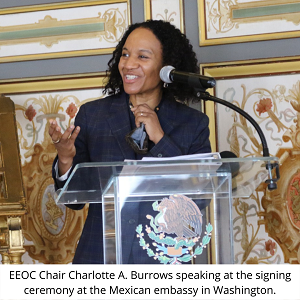 This event took place during the celebration of the 13th Labor Rights Week (LRW), an initiative of the Government of Mexico that seeks to increase awareness and inform the Mexican and Hispanic communities about their most fundamental labor rights through a series of events and activities. undertaken by the consular network of Mexico in the United States, in alliance with government agencies, civil society and other relevant actors.

During the ceremony, Ambassador Moctezuma highlighted that “providing legal certainty and protection to migrant workers is a top priority for [Mexican] President Lopez Obrador. Therefore, we are committed to consolidate long-lasting alliances with valuable partners to fight against abuses and illegal practices. We are deeply grateful for the renewal of these agreements today.”

Secretary of Labor Walsh added, “Today we renew agreements that help ensure all workers in the United States have the right to full payment of wages and a safe place to work. We commit to making sure that Mexican workers know their rights and employers know their responsibilities under U.S. law.”

The general counsel of the National Labor Relations Board, Jennifer A. Abruzzo, said, “Today’s letter of arrangement is a crucial step toward achieving our mutual goals. The NLRB and the federal law that we enforce, the National Labor Relations Act, protects workers who join together to collectively seek fair treatment, better wages, and improved working conditions. When workers know their rights, they are empowered to advocate for beneficial change in their workplaces.”

The ceremony was held at the iconic Mexican Cultural Institute in Washington, which last June celebrated its 31st anniversary and in July celebrated its centennial hosting the missions of Mexico in the U.S. capital. The event was broadcast via social media and could be seen at the following link: https://youtu.be/-x4jOL-XpFU

The EEOC advances opportunity in the workplace by enforcing federal laws prohibiting employment discrimination. More information is available at www.eeoc.gov. Stay connected with the latest EEOC news by subscribing to our email updates.