Victoria A. Lipnic serves as a Commissioner of the U.S. Equal Employment Opportunity Commission.  She was first named to the Commission by President Obama in 2010, when she was confirmed by the U.S. Senate for a five-year term.  In 2015 she was re-nominated and confirmed by the U.S. Senate for a second five-year term.  On January 25, 2017, she was named Acting Chair of the Commission by President Donald J. Trump, a position she held for nearly two and a half years.

During her tenure as Acting Chair, Lipnic led the Commission to major accomplishments on both policy and operational matters.  Because of her work on the Commission's 2015-2016 Select Task Force on the Study of Harassment in the Workplace (a panel she co-chaired with then-Commissioner Chai Feldblum), the Commission was well-positioned when the #MeToo movement arrived in the fall of 2017.  Lipnic ensured that the Commission doubled-down on the work of the Select Task Force and used every tool of the agency's resources, from outreach to education to enforcement, to lead on the harassment issue.  She worked closely with Congress to secure additional resources for the agency.  She also highlighted age discrimination as one of her signature issues, leading the Commission to hold a public meeting on the topic and culminating in a report in June 2018.  During her tenure as Acting Chair, the Commission also made major strides on operational matters.  The Commission saw the most dramatic improvement in its backlog of private sector charges, reducing it to the lowest level in 13 years.  And, she created the position of Chief Data Officer for the agency, its first ever, and oversaw the re-organization of the agency's new Office of Enterprise Data and Analytics, the most significant operational change to the agency in 25 years.

Throughout her tenure, Commissioner Lipnic has played a key role in a wide variety of Commission activities and policies.  Immediately upon her arrival, she was integral in the Commission's development of regulations under the bipartisan ADA Amendments Act of 2008.  She has worked to promote the Commission giving public hearing, and often guidance, to important workplace issues such as the use of leave as a reasonable accommodation under the ADA, employer-provided wellness programs, harassment prevention, and the use of social media in the workplace and big data in employment.  In 2014, she helped lead the agency's celebration of the 50th anniversary of the Civil Rights Act of 1964, including organizing an event in Chicago, Illinois, to recognize the pioneering role of female flight attendants in the early enforcement of Title VII's prohibition of sex discrimination.  She has also taken great interest in issues relating to equal pay, the good governance of the Commission, increased transparency and public participation in policymaking, and the proper role of the EEOC as a regulatory enforcement agency.

Commissioner Lipnic has brought to the EEOC a breadth of experience working with federal labor and employment laws.  From 2002 to 2009, she served as the U.S. Assistant Secretary of Labor for Employment Standards, where she oversaw the Wage and Hour Division, the Office of Federal Contract Compliance Programs (OFCCP), the Office of Workers' Compensation Programs, and the Office of Labor Management Standards.  During her time as Assistant Secretary, among other accomplishments, she oversaw the development of the nation's first military family leave regulations under the Family and Medical Leave Act and led the OFCCP's efforts on equal pay. She has also worked on Capitol Hill as Workforce Policy Counsel to the Committee on Education and the Workforce in the U.S. House of Representatives.  Before her work for Congress, she acted as in-house counsel for labor and employment matters to the U.S. Postal Service for six years.  She also served as a special assistant for business liaison on the staff of then U.S. Secretary of Commerce, Malcolm Baldrige.  Immediately prior to her service at the Commission, she was of counsel to the law firm of Seyfarth Shaw LLP in its Washington, D.C., office.

She received her B.A. in Political Science and History from Allegheny College and her J.D. from George Mason University School of Law.  She grew up as "the mayor's daughter" - her father was the mayor of her hometown of Carrolltown, Pennsylvania, for 25 years.  She says he taught her from an early age the importance of civic participation and of effective and accountable government. 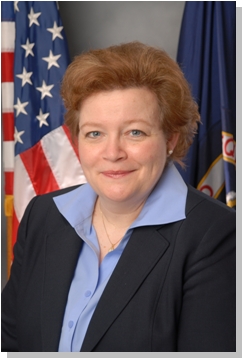 A Message from Victoria A. Lipnic
Archived Messages