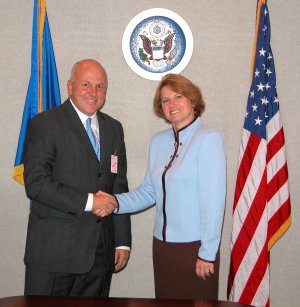 WASHINGTON  Cari M. Dominguez, Chair of the U.S. Equal Employment Opportunity Commission (EEOC), and John Tyson, Chairman and CEO of Tyson Foods, Inc. (NYSE: TSN), today signed a National Universal Agreement to Mediate (NUAM) to informally resolve workplace disputes through Alternative Dispute Resolution (ADR) prior to an EEOC investigation or potential litigation. The NUAM with the food company is the 62nd such agreement between the Commission and Corporate America

"The Commission is pleased that Tyson Foods has joined us in partnership to address workplace conflicts through the use of EEOC mediation," said Chair Dominguez during today's signing ceremony at EEOC Headquarters in Washington. "Not only can mediation resolve employment disputes early on, but it can also improve workplace communications, which enhances organizational performance."

Chairman John Tyson, said: "Part of our vision is continuously looking for additional ways to have a cohesive and positive working environment for our Team Members  who are our strength. We certainly view this innovative agreement with EEOC as another critical and efficient means to mediate disputes and avoid litigation that is costly for everyone. With this new approach available to us, we look forward to even stronger relations within our workforce."

Under the terms of the NUAM, all eligible charges of discrimination filed with the Commission naming Tyson Foods, Inc. as the employer/respondent will be referred to the EEOC's mediation unit, as appropriate. The company will designate a corporate representative to handle all inquiries and other logistical matters related to potential charges in order to facilitate a prompt scheduling of the matter for EEOC mediation.

Expanding mediation is a key component of Chair Dominguez's Five-Point Plan to improve the EEOC's overall operational efficiency and effectiveness. In addition to the 62 National Universal Agreements to Mediate, EEOC district offices have entered into more than 600 local mediation agreements with large employers within their respective geographic jurisdictions. The benefits of universal mediation agreements include eliminating the time between serving a charge and getting it to the appropriate employer contact, and facilitating the scheduling of the mediation sessions. A NUAM is flexible in that it allows both the EEOC and employers to opt out of mediation on a case-by-case basis if either believes the claim is not appropriate, thus protecting a key component of voluntariness.

Since 1999, when EEOC's National Mediation Program was launched, the Commission has mediated more than 50,000 cases with approximately 70% being successfully resolved in an average time of 85 days - nearly half the time it takes to resolve a charge through the investigative process. Additionally, EEOC's experience over the years has shown that 13-20% of mediated cases are resolved based solely on a non-monetary benefit. A comprehensive survey conducted by independent researchers showed that 91% of charging parties and 96% of employers would use EEOC's mediation program again if a charge was filed - irrespective of issues, bases, size of employer, or whether the charge was resolved or not. The study concluded that the parties saw the EEOC's process as fair, neutral, and efficient.

Tyson Foods, Inc., founded in 1935 with headquarters in Springdale, Arkansas, is the world's largest processor and marketer of chicken, beef, and pork and the second-largest food company in the FORTUNE 500. The company produces a wide variety of protein-based and prepared food products, which are marketed under the "Powered by Tyson" strategy. Tyson is the recognized market leader in the retail and food service markets it serves, providing products and service to customers throughout the United States and more than 80 countries. Tyson has approximately 114,000 Team Members employed at 300 facilities and offices in 27 states and 22 countries. Further information about the company is available on its web site at www.tysonfoodsinc.com.