Charlotte A. Burrows was designated by President Biden as Chair of the EEOC on Jan. 20, 2021.  She was initially nominated to serve as a Commissioner of the U.S. Equal Employment Opportunity Commission (EEOC) in 2014 and then re-nominated in 2019.  The U.S. Senate unanimously confirmed her to a second term ending in 2023.

Chair Burrows has advocated for strong civil rights protections and robust cooperation between the Commission, employers, and employees to advance equal opportunity in the workplace.  She seeks to enhance the Commission's enforcement of all laws within its jurisdiction, focusing in particular on initiatives to combat harassment, foster pay equity, and advance diversity and inclusion.  While at the Commission, she has worked to increase the agency's outreach to Native Americans, vulnerable immigrant and migrant communities, and other traditionally underserved populations.  In addition, Chair Burrows is particularly interested in the impact of technology and big data on civil rights and employee privacy.

Prior to her appointment to the EEOC, Chair Burrows served as Associate Deputy Attorney General at the U.S. Department of Justice (DOJ), where she worked on a broad range of civil and criminal matters, including employment litigation, voting rights, combatting racial profiling, and implementing the Violence Against Women Act, among others.

Chair Burrows previously served as General Counsel for Civil and Constitutional Rights to Senator Edward M. Kennedy on the Senate Judiciary Committee and later on the Senate Committee on Health, Education, Labor and Pensions.  During her time on Capitol Hill, she worked on a variety of legislative initiatives, including the Lilly Ledbetter Fair Pay Act of 2009 and the Americans with Disabilities Act Amendments Act of 2008.

Before working on the Hill, Chair Burrows held several roles in the Civil Rights Division's Employment Litigation Section at DOJ, including Deputy Chief of the Section.  There, she represented the United States in all phases of civil litigation, including trial, to enforce Title VII of the Civil Rights Act of 1964.

Earlier in her career, she served as a judicial clerk on the U.S. Court of Appeals for the Third Circuit and was an associate at Debevoise & Plimpton, LLP.

Chair Burrows received an A.B. from Princeton University and a J.D. from Yale Law School. 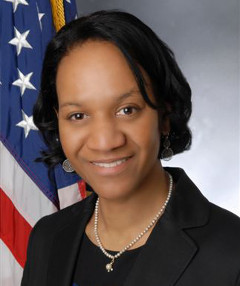