This FY 2012 Performance and Accountability Report (PAR) was prepared in accordance with the Reports Consolidation Act of 2000 and the Office of Management and Budget's (OMB) Circular A-136, Financial Reporting Requirements. It presents the results of the U.S. Equal Employment Opportunity Commission's programs and financial performance, along with its management challenges. This section of the PAR summarizes agency efforts in each of these areas. A more detailed discussion can be found in the following sections of the report:

This report also satisfies the Commission's obligation to provide Congress with annual reports of the agency's significant accomplishments achieved during the fiscal year.

The U.S. Equal Employment Opportunity Commission (EEOC or Commission) is the leading federal law enforcement agency dedicated to eradicating employment discrimination on the basis of race, color, national origin, sex, religion, pregnancy, age, disability, and family medical history or genetic information. The agency began its work nearly 50 years ago and while there have been significant changes in society and the workplace, the public continues to rely on the EEOC to carry out its responsibility to bring justice and equal opportunity to the workplace.

The Government Performance and Results Modernization Act, enacted on January 4, 2011, requires Federal agencies to prepare a Strategic Plan every four fiscal years, beginning in 2012. (5 USC 306, as amended). As a result, the EEOC developed a new Strategic Plan for Fiscal Years 2012-2016 ("Strategic Plan" or "Plan"). The new Plan was approved by the Commission on February 22, 2012.

The FY 2012 PAR is based on the agency's new Fiscal Year 2012-2016 Strategic Plan, which is located at: http://www.eeoc.gov/eeoc/plan/strategic_plan_12to16.cfm. The new Plan established a framework for achieving the EEOC's mission to stop and remedy unlawful employment discrimination, so that the Nation might soon realize the Commission's vision of justice and equality in the workplace.

To accomplish our mission and achieve this vision for the 21st century, the EEOC has committed to pursuing the following objectives and outcome goals:

The Plan also identified strategies for achieving each outcome goal and identified 14 performance measures for gauging the EEOC's progress as it approaches FY 2016. The Agency's progress in meeting these measures is displayed below and discussed in detail in the Performance Results section of this report.

In FY 2012, the EEOC produced historic levels in its year-end results. Most notably, the pending inventory of private sector charges was reduced by 7,824 charges over the FY 2011 level, bringing the level to 70,312, which reflects the second consecutive year of significant reduction in inventory since FY 2002. These results were achieved despite having received 99,412 charges. A total of 111,139 charges were resolved in FY 2012.

In FY 2012, the EEOC secured more than $61.9 million in relief for parties who requested hearings in the federal sector. There were a total of 7,728 requests for hearings received in FY 2012. Additionally, the Commission's hearings program resolved a total of 7,538 complaints.

During the last fiscal year, the EEOC received 4,350 appeals of final agency actions in the federal sector, a 16.0 percent decrease from the 5,176 such appeals received in FY 2011. This offsets the 13.8 percent increase that occurred between FY 2010 and FY 2011. FY 2012 was the first full year the EEOC applied a more balanced approach to the resolution of the newest and oldest appeals. The agency resolved 4,265 appeals, including 52.9 percent of them within 180 days of their receipt.

Field legal units of the agency filed 122 merits lawsuits during FY 2012. These included 86 individual suits, 26 multiple-victim suits (with fewer than 20 victims) and 10 systemic suits. Legal staff resolved 254 merits lawsuits for a total monetary recovery of $44.2 million. At the end of FY 2012, the EEOC had 309 cases on its active docket, of which 75 (24 percent) involved multiple aggrieved parties (but fewer than 20) and 62 (20 percent) involved challenges to systemic discrimination.

In FY 2012, EEOC field offices completed work on 240 systemic investigations resulting in 46 settlements or conciliation agreements, recovering $36.2 million. In addition, 94 systemic investigations were resolved with reasonable cause determinations. In FY 2012, 12 new Commissioner charges were filed. Systemic suits comprised 8 percent of all merits filings, and by the end of the year represented 20 percent of all active merit suits - the largest proportion since tracking started in FY 2006.

The work of the Commission is made more efficient with interagency coordination and to this end, the EEOC has established active and ongoing relationships with other agencies as well as the White House. Coordinating with partners allows shared resources, information and ideas, resulting in a greater impact on many different communities and issues. In FY 2012, these efforts included the EEOC's participation in the White House Initiative on Asian American and Pacific Islanders (AAPI), the National HIV/AIDS Strategy, the Federal Interagency Reentry Council, President's Interagency Task Force to Monitor and Combat Human Trafficking and Senior Policy Operating Group, and the White House National Equal Pay Enforcement Task Force.

In FY 2012, the Commission published final regulations and guidance on two federal employment discrimination statutes. The EEOC issued its final rule on Disparate Impact and Reasonable Factors Other Than Age (RFOA) Under the Age Discrimination in Employment Act (ADEA) on March 30, 2012. The Enforcement Guidance on the Consideration of Arrest and Conviction Records in Employment Decisions Under Title VII of the Civil Rights Act of 1964 was issued by the Commission on April 25, 2012. The Commission also issued a final rule to improve efficiencies and encourage innovation in the federal sector EEO compliant process, EEOC Final Rule on Federal Sector Equal Employment Opportunity, on July 25, 2012.

The agency's outreach programs reached 318,838 persons in FY 2012 through participation in 3,992 no-cost educational, training, and outreach events. Additionally, in FY 2012, the EEOC Training Institute, which is managed under a separate statutory authority that enables the Commission to offer in-depth and specialized programs on a fee basis, supplementing the free general informational and outreach activities, trained over 23,119 individuals at more than 473 events, including 417 field "Customer Specific Training" events with 16,932 attendees.

Pursuant to the President's Executive Order 13522 "Creating Labor-Management Forums to Improve Delivery of Government Services," the EEOC established a National Joint Labor Management Council (JLMC) in addition to Councils in each of its 15 Districts, the Washington Field Office, and Headquarters. The National JLMC established three metrics to measure goal-related activities associated with implementing the Executive Order "Improve Mission and Service Delivery," "Employee Satisfaction and Engagement" and "Improved Labor-Management Relations." In FY 2012, the JLMC reported to the President's National Council of Federal Labor Management Relations that the Agency experienced improvements in each of the metrics.

The Federal Employees' Viewpoint Survey shows that EEOC employees continue to like the kind of work they do, believe their work is important, are willing to give extra effort to get a job done and, are looking for ways to do their jobs better. In fact, employees rate the overall quality of work done in their work unit above 80 percent. Employees also say they are held accountable for achieving results and know how their work relates to agency goals. Supervisors/Team Leaders talk with their employees about their performance and treat them with respect.

Based on the actions taken, and considering the agency's controls environment as a whole, the agency concludes that during FY 2012, its financial and management controls systems were in compliance with the Federal Managers' Financial Integrity Act (FMFIA). The agency has plans in place to resolve the remaining financial non-conformances in FY 2013. The controls systems were effective; agency resources were used consistent with the agency's mission; the resources were used in compliance with laws and regulations; and, there was minimal potential for waste, fraud, and mismanagement of the resources. 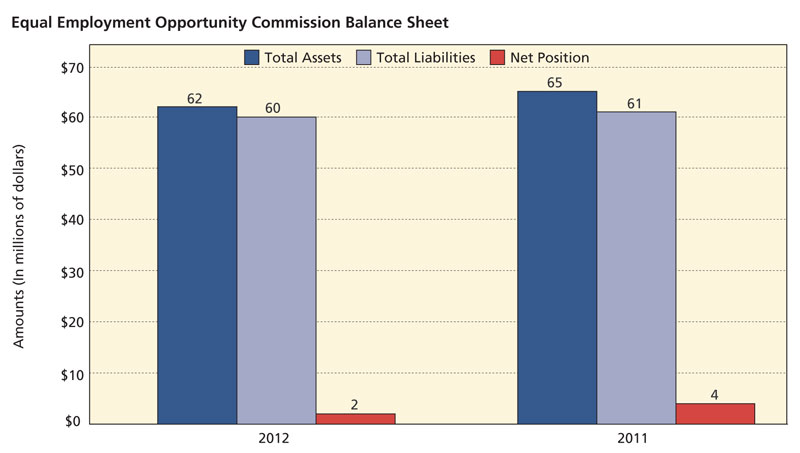 The Consolidated Statements of Net Cost presents the gross cost incurred by major programs less any revenue earned. Overall, in FY 2012, EEOC's Consolidated Statements of Net Cost decreased by $23 million or 6 percent. The allocation of costs for FY 2012 shows that private sector resources used for enforcement and litigation decreased $19 million, or 5 percent, while the Federal Sector Programs decreased by $4 million or 7 percent. 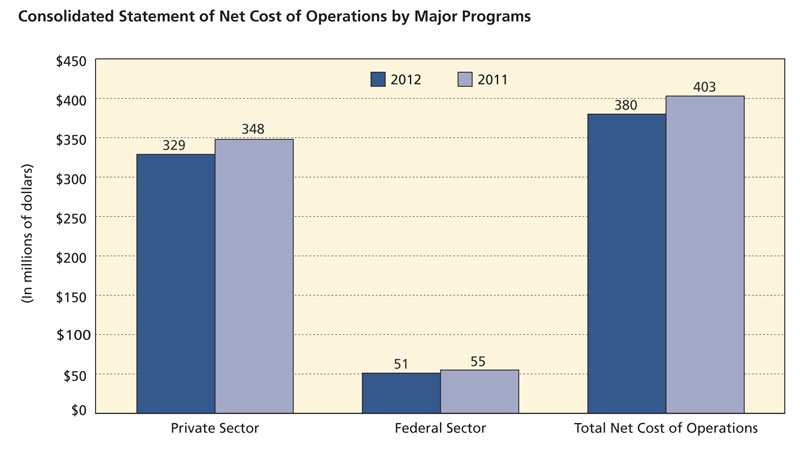 The Combined Statements of Budgetary Resources shows how budgetary resources were made available and the status of those resources at the end of the fiscal year. In FY 2012, EEOC received a $360 million appropriation. 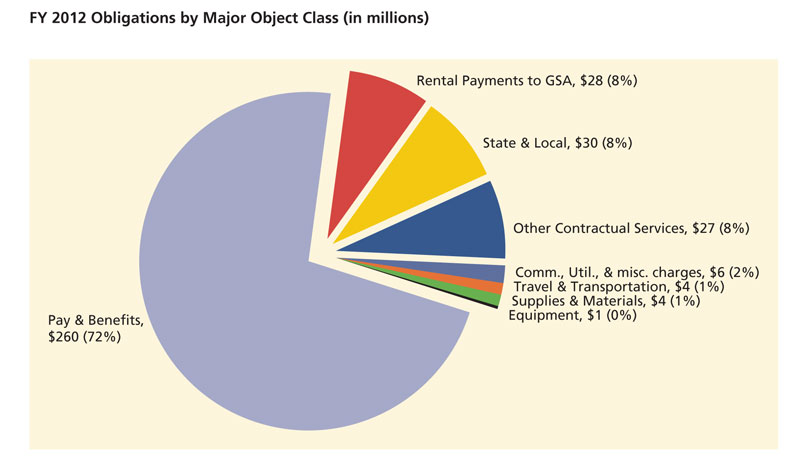 The dual axis chart below depicts EEOC's compensation and benefits versus full-time equivalents (FTE) over the past six years. EEOC ended FY 2012 with 2,346 FTEs, a net decrease of 159, or 6 percent, below FY 2011. 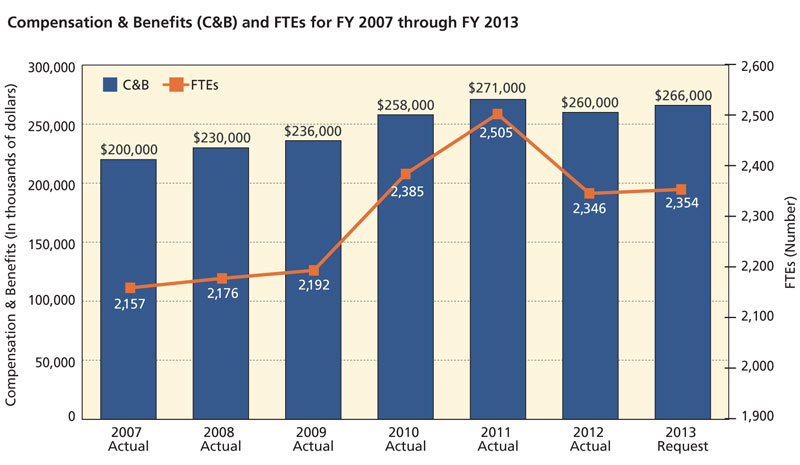