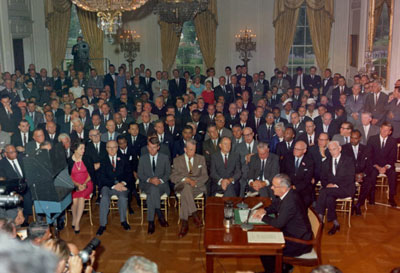 The U.S. Equal Employment Opportunity Commission, in cooperation with the American Bar Association/Equal Employment Opportunity Committee, the District of Columbia Bar/Labor & Employment Law Section, the Georgetown University Law Center, and the Lawyers' Committee for Civil Rights Under Law, hosted a series of panel discussions that examined the enactment and enforcement of Title VII of the Civil Rights Act of 1964, which prohibits discrimination in employment on the bases of race, color, national origin, religion, and sex.

These discussions brought together many of the leading judges, lawyers, and activists involved in the passage of Title VII and its amendments and the litigation of the landmark cases interpreting Title VII and establishing the guidelines for proving workplace discrimination. The three panels addressed (1) the initial impact of Title VII and the development of the principles used to establish discrimination; (2) efforts to enlarge the scope of Title VII and extend its protections to women and other minority groups; and (3) how Title VII was made more effective through amendments that added damages and the right to jury trials.

Each of these panels was attended by roughly 200 people. Transcripts from all three panels are now available (see below).