This FY 2013 Performance and Accountability Report (PAR) was prepared in accordance with the Reports Consolidation Act of 2000 and the Office of Management and Budget's (OMB) Circular A-136, Financial Reporting Requirements. It presents the results of the U.S. Equal Employment Opportunity Commission's programs and financial performance, along with its management challenges. This section of the PAR summarizes agency efforts in each of these areas. A more detailed discussion can be found in the following sections of the report:

This report also satisfies the Commission's obligation to provide Congress with annual reports of the agency's significant accomplishments achieved during the fiscal year.

The U.S. Equal Employment Opportunity Commission ("EEOC" or "Commission" or "the agency") is the leading federal law enforcement agency dedicated to eradicating employment discrimination on the basis of race, color, national origin, sex, religion, pregnancy, age, disability, and family medical history or genetic information. The agency began its work nearly 50 years ago and while there have been significant changes in society and the workplace, the public continues to rely on the EEOC to carry out its responsibility to bring justice and equal opportunity to the workplace.

The Government Performance and Results Modernization Act, enacted on January 4, 2011, requires Federal agencies to prepare a Strategic Plan every four fiscal years, beginning in 2012. (5 USC 306, as amended). As a result, the EEOC developed a new Strategic Plan for Fiscal Years 2012-2016 ("Strategic Plan" or "Plan"). The Plan was approved by the Commission on February 22, 2012.

The FY 2013 PAR is based on the agency's Fiscal Year's 2012-2016 Strategic Plan, which is located at: http:// www.eeoc.gov/eeoc/plan/strategic_plan_12to16.cfm. The Plan established an effective framework for achieving the EEOC's mission to stop and remedy unlawful employment discrimination, in support of the Commission's vision of justice and equality in the workplace. To that end, the EEOC has committed to pursuing the following strategic objectives and goals:

The Plan also identified strategies for achieving each outcome goal and identified 14 performance measures for gauging the EEOC's progress as it approaches FY 2016. The agency's progress in meeting these measures is displayed below and discussed in detail in the Performance Results section of this report.

Targets Partially Met: A rating assigned to target results where (1) at least half of the activities targeted for completion were completed, or (2) we were unable to assess the results because full year data is not yet available.

In concert with the goals established in the Strategic Plan is the need to serve the public efficiently. Managing the agency's charge, complaint, and appeals inventory is part of that obligation. In FY 2010, Chair Jacqueline Berrien initiated a multi-year approach of sustained management attention to reverse the growth of the private sector charge inventory which had increased from 18-38 percent between FY 2004 and FY 2009. As a result, the EEOC reduced its private sector inventory by nearly 20 percent from FY 2010 through FY 2012-the first decreases in nearly a decade.

Despite the impact of sequestration and limited resources, the EEOC was able to keep the increase to the private sector inventory to 469 charges. In FY 2013, the EEOC received 93,727 charges. This is approximately a 6,000 charge decrease from the prior three fiscal years; however it is still one of the top five fiscal years in terms of receipts. In addition, a total of 97,252 charges were resolved in FY 2013, a drop of nearly 14,000. While this is a significant decrease in resolutions, it is also a remarkable achievement given the decline in staffing and resources the agency faced in FY 2013.

Notably, the average processing time to resolve charges dropped by 21 days to 267 days. By improving the timeliness of charge resolution and the EEOC's customer service efforts, these results better position the agency for FY 2014. However, further gains may be tempered by the continuing hiring freeze and repercussions from the Government shutdown.

In the federal sector adjudicatory program, the EEOC received 7,077 requests for hearings in FY 2013. Additionally, the Commission's hearings program resolved a total of 6,789 complaints.

During the last fiscal year, the EEOC received 4,244 appeals of final agency actions in the federal sector, a 2.4 percent decrease from the 4,350 such appeals received in FY 2012. FY 2013 was the second year in which the EEOC applied a more balanced approach to the resolution of the newest and oldest appeals. The agency resolved 4,361 appeals, including 47.9 percent of them within 180 days of their receipt.

The EEOC's private sector administrative enforcement activities secured $372.1 million in monetary benefits in FY 2013, the highest level of monetary relief ever obtained by the Commission through the administrative process and $6.7 million more than was recovered in FY 2012. Overall, the agency secured both monetary and non-monetary benefits for more than 70,522 people through administrative enforcement activities including mediation, settlements, conciliations, and withdrawals with benefits.

Field legal units of the agency filed 131 merits lawsuits during FY 2013. These included 89 individual suits, 21 non-systemic class suits, and 21 systemic suits. Legal staff resolved 209 merits lawsuits for a total monetary recovery of $39 million. At the end of FY 2013, the EEOC had 231 cases on its active docket, of which 46 (20 percent) were non-systemic class cases and 54 (23 percent) involved challenges to systemic discrimination.

In FY 2013, the EEOC's field offices completed work on 300 systemic investigations resulting in 63 settlements or conciliation agreements, recovering approximately $40 million. In addition, 106 reasonable cause determinations in systemic investigations were issued in FY 2013. Systemic suits comprised 16 percent of all merits filings, and by the end of the year represented 23.4 percent of all active merit suits-the largest proportion since tracking started in FY 2006.

In FY 2013, the EEOC secured more than $56.3 million in relief for parties who requested hearings in the federal sector.

During fiscally challenging times, the work of the Commission is made more efficient when the EEOC coordinates closely with other federal agencies. EEOC has active relationships with a number of federal agencies, the Office of Management and Budget, and the White House. These interagency partnerships provide opportunities to maximize the benefit of each agency's work to the public, to avoid duplication of effort, and ensure the most efficient use of agency resources. In FY 2013, the EEOC participated in a number of interagency partnerships, including the White House Initiative on Asian American and Pacific Islanders (WHIAPPI) (www.whitehouse.gov/aapi), the National HIV/AIDS Strategy (www.whitehouse. gov/administration/eop/onap/nhas), the Federal Interagency Reentry Council (www.eeoc.gov/eeoc/interagency/reentry_ council.cfm), the National Equal Pay Enforcement Task Force (http://www.whitehouse.gov/equal-pay/career), the Tri-Agency (EEOC, Department of Justice, and Department of Labor) Working Group, the President's Interagency Task Force to Monitor and Combat Human Trafficking (PITF) (http://state.gov/j/tip/rls/reports/pitf/index.htm), and the Senior Policy Operating Group (SPOG).

In FY 2013, the Commission published final regulations and guidance or assistance on substantive issues under the laws enforced by the EEOC. A technical assistance document on The Mental Health Provider's Role in a Client's Request for a Reasonable Accommodation at Work, was published on May 1, 2013. A series of technical assistance documents - Revisions to the Americans with Disabilities Act (ADA) Questions and Answers Series - was released on May 15, 2013. The EEOC also issued its final rule on Availability of Records on June 19, 2013 and a final rule on Correcting Procedural Regulations was issued by the Commission on September 6, 2013.

The agency's outreach programs reached 283,000 persons in FY 2013 through participation in 3,854 no-cost educational, training, and outreach events. Additionally, in FY 2013, the EEOC Training Institute, which is managed under a separate statutory authority that enables the Commission to offer in-depth and specialized programs on a fee basis, supplementing the free general informational and outreach activities, trained 17,000 individuals at more than 370 events, including 121 field "Customer Specific Training" events with approximately 5,600 attendees.

Pursuant to the President's Executive Order 13522, "Creating Labor-Management Forums to Improve Delivery of Government Services," the EEOC continued its work with the National Council of EEOC Locals No. 216 and the AFGEAFL- CIO in expanding labor relations under the Order. During FY 2014, the agency expects to provide guidance to Local Management Forums on implementing cost savings issues and other programs directed at employee morale.

The Federal Employees' Viewpoint Survey shows that EEOC employees continue to like the kind of work they do, believe their work is important, are willing to give extra effort to get a job done and, are looking for ways to do their jobs better. In fact, employees rate the overall quality of work done in their work unit above 85 percent. Employees also say they are held accountable for achieving results and know how their work relates to agency goals. Supervisors/Team Leaders talk with their employees about their performance and treat them with respect.

Based on the actions taken, and considering the agency's controls environment as a whole, the agency concludes that during FY 2013, its financial and management controls systems were in compliance with the Federal Managers' Financial Integrity Act (FMFIA). The agency has plans in place to resolve the remaining financial non-conformances in FY 2014. The controls systems were effective; agency resources were used consistent with the agency's mission; the resources were used in compliance with laws and regulations; and, there was minimal potential for waste, fraud, and mismanagement of the resources. 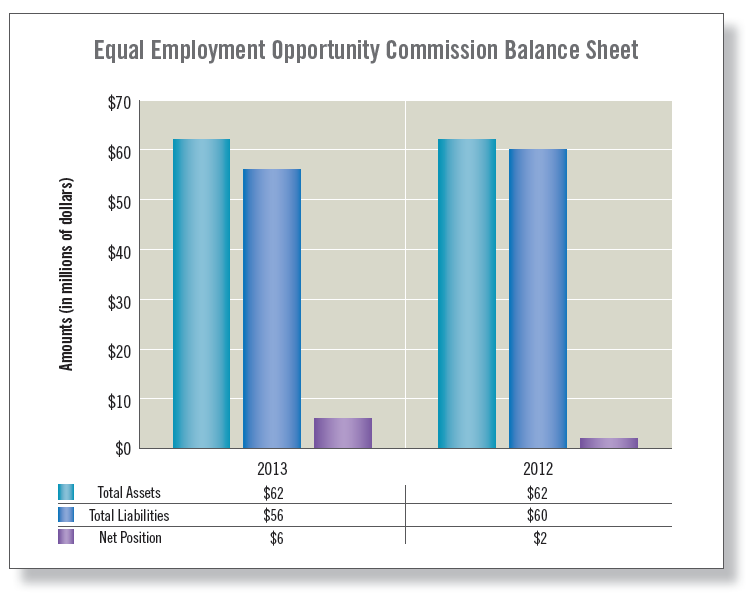 The Consolidated Statements of Net Cost presents the gross cost incurred by all programs less any revenue earned. Overall, in FY 2013, EEOC's Consolidated Statements of Net Cost of Operations decreased by $23 million or 6 percent. The allocation of costs for FY 2013 shows that the net cost for the private sector and outreach decreased by $18 million, or 5 percent, while the net cost for Federal Sector Programs decreased by $5 million or 10 percent. 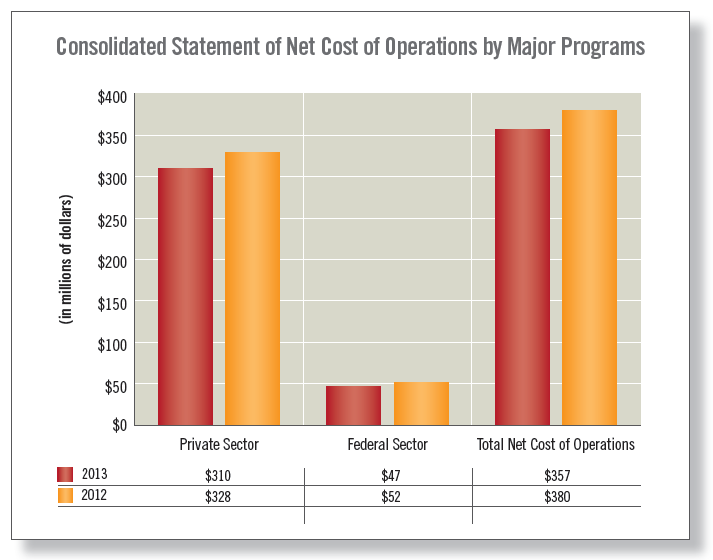 The Combined Statements of Budgetary Resources shows how budgetary resources were made available and the status of those resources at the end of the fiscal year. In FY 2013, EEOC received $344 million in budget authority. EEOC ended FY 2013 with a decrease in total budgetary resources. Resources not available for new obligations at the end of the year totaled $11 million and $11 million in FY 2013 and FY 2012, respectively. The unobligated balance not available represents expired budget authority from prior years that are no longer available for new obligations. 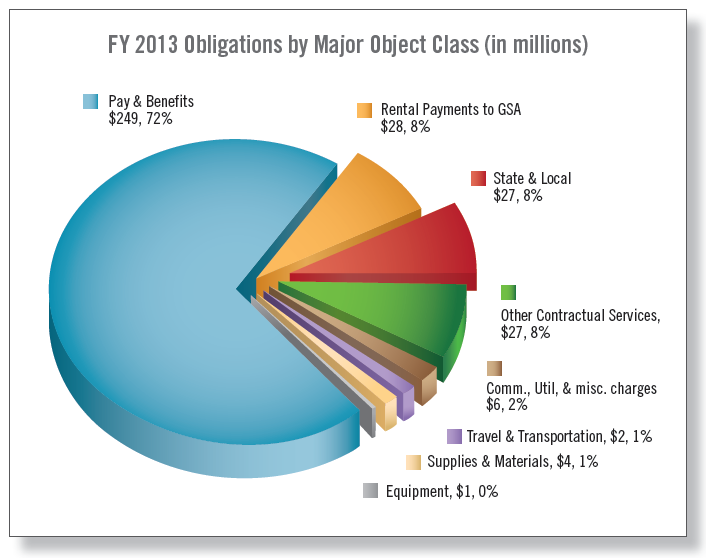 The dual axis chart below depicts EEOC's compensation and benefits versus full-time equivalents (FTE) over the past six years. EEOC ended FY 2013 with 2147 FTEs, a net decrease of 199, or 8 percent, below FY 2012. 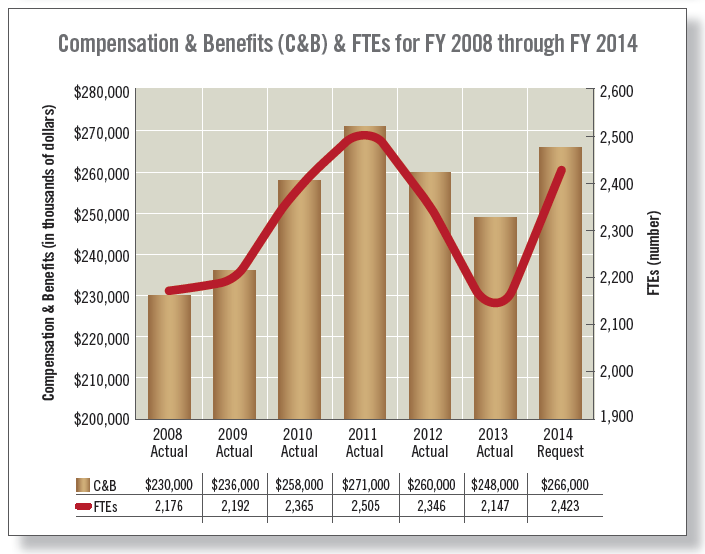