This Fiscal Year 2015 Performance and Accountability Report (PAR) was prepared in accordance with the Reports Consolidation Act of 2000 and the Office of Management and Budget's (OMB) Circular A-136, Financial Reporting Requirements. It presents the U.S. Equal Employment Opportunity Commission's ("EEOC", "Commission," or "the agency") program results and financial performance and identifies management challenges. Agency efforts in each of these areas are summarized below. A more detailed discussion can be found in the following sections of the report:

This report also satisfies EEOC's obligation to provide Congress with annual reports of the agency's significant accomplishments achieved during the fiscal year.

Fiscal year 2015 marked the 50th anniversary of the Commission. Title VII of the Civil Rights Act of 1964 (Title VII) created EEOC to enforce protections against employment discrimination on the basis of race, color, national origin, religion, and sex. We opened our doors on July 2, 1965, a year to the day after the Civil Rights Act was signed.

In the 50 years since EEOC opened for business, the agency's responsibilities and workload have expanded exponentially. Today, we receive nearly 10 times as many charges a year as we did in 1965. In addition, Congress vested EEOC with responsibility to enforce the Equal Pay Act of 1963 (EPA), the Age Discrimination in Employment Act of 1967 (ADEA), Section 501 of the Rehabilitation Act of 1973, Titles I and V of the Americans with Disabilities Act of 1990 (ADA), and Title II of the Genetic Information Nondiscrimination Act of 2008 (GINA). In addition, in 1972, Congress further expanded our responsibilities by including the federal government within the protections afforded under Title VII and providing the agency with independent litigation authority against private employers under Title VII.

Today, EEOC is the leading federal law enforcement agency dedicated to eradicating employment discrimination. EEOC receives, investigates, and resolves charges of employment discrimination filed against private sector employers, employment agencies, labor unions, and state and local governments. Where the agency does not resolve these charges through conciliation or other informal methods, it may file suit in court against private sector employers, employment agencies and labor unions (and against state and local governments in cases alleging age discrimination or equal pay violations).

EEOC also leads and coordinates equal employment opportunity efforts across the federal government, and conducts administrative hearings and issues appellate decisions on complaints of discrimination filed by federal employees and applicants for federal employment. Finally, the agency engages in extensive communication and outreach, provides technical assistance, and promulgates regulations and written enforcement guidance to help employers and employees better understand their rights and responsibilities under the laws EEOC enforces.

A more detailed explanation of EEOC's structure and the laws it enforces can be found in Appendix A.

EEOC's Strategic Plan established a national framework to achieve the agency's mission to "stop and remedy unlawful employment discrimination," in support of the Commission's vision of "justice and equality in the workplace." To that end, EEOC has committed to pursuing the following three strategic objectives and goals:

The Plan also identified strategies for achieving each outcome goal and identified 14 performance measures for gauging EEOC's progress as it approaches fiscal year 2016. The agency's progress in meeting these measures is displayed below and discussed in detail in the Performance Results section of this report.

This past fiscal year, EEOC strengthened its ability to enforce the federal equal employment laws efficiently and effectively. EEOC's Strategic Plan and Strategic Enforcement Plan provide the framework and direction for a robust and coordinated national enforcement program. This framework prioritizes enforcement and outreach efforts in areas with the greatest need and potential for strategic impact. To achieve this broader impact, EEOC continued to focus its law enforcement efforts on matters that have significant benefits for workers and employers, and which improve more workplace practices.

In fiscal year 2015, EEOC field legal units filed 142 merits lawsuits including 100 individual suits, and 42 suits involving discriminatory policies or multiple victims, of which 16 were systemic suits. EEOC's legal staff resolved 155 merits lawsuits in the federal district courts for a total monetary recovery of $65.3 million. At the end of fiscal year 2015, EEOC had 218 cases on its active district court docket, of which 48 (22 percent) involved challenges to systemic discrimination and 40 (18.3 percent) were multiple victim cases.

EEOC has strengthened collaborative efforts with enforcement partners in federal, state, and local government as well as with employer, employee, and academic communities to maximize the impact of our collective knowledge and resources. Throughout fiscal year 2015 EEOC has expanded collaborative efforts to address issues such as harassment and contributed to the work of intergovernmental efforts such as the National Equal Pay Enforcement Task Force, the Cabinet-level Reentry Council, the White House Initiative on Asian Americans and Pacific Islanders, the Presidential Inter-agency Task Force to Monitor and Combat Trafficking, the President's HIV/AIDS Strategy, and the Interagency Working Group for the Consistent Enforcement of Federal Labor, Employment and Immigration Laws, among other collaborations, including EEOC's efforts to support the 21st Century Policing Taskforce.

Issuing regulations and guidance is at the heart of EEOC's role of leading the enforcement of federal employment anti-discrimination laws. Regulations and guidance inform individuals and employers of their legal rights and responsibilities, aid EEOC employees in conducting their work, and serve as references for the courts when resolving novel legal issues.

In fiscal year 2015, the agency issued two regulatory actions: an Advance Notice of Proposed Rulemaking (ANPRM) for the Federal Sector Equal Employment Opportunity Process, to pose questions to the public about what changes were needed to improve EEOC's federal sector procedures at Part 1614 (See http://www.eeoc.gov/laws/regulations/index.cfm, and at the Federal Register, https://www.federalregister.gov/articles/2015/02/06/2015-02330/federal-sector-equal-employment-opportunity); and a Notice of Proposed Rulemaking (NPRM) to amend the regulations and interpretive guidance implementing Title I of the Americans with Disabilities Act (ADA) as they relate to employer wellness programs,to request comments on the proposal to amend the portion of the ADA regulations and interpretive guidance concerning disability-related inquiries and medical examinations of employees as they relate to employer wellness programs. (See http://www.eeoc.gov/laws/regulations/index.cfm and from the Federal Register at https://www.federalregister.gov/articles/2015/04/20/2015-08827/amendments-to-regulations-under-the-americans-with-disabilities-act.)

Prevention through Outreach and Education

The agency's no-cost outreach programs reached 336,855 persons in fiscal year 2015. EEOC offices participated in over 3,700 no-cost educational, training, and outreach events. Additionally, in fiscal year 2015, the Training Institute, which is managed under a separate statutory authority that enables the agency to offer in-depth and specialized programs on a fee basis supplementing the free general informational and outreach activities, trained 12,000 individuals at more than 140 events, which included 28 Technical Assistance Program Seminars that were attended by over 5,000 participants.

In fiscal year 2015, EEOC continued to work on improving labor and employee relations. These efforts included regular meetings between the Office of the Chair and Union leadership on conditions of employment affecting bargaining unit employees.

EEOC participates in the OPM's Federal Employee Viewpoint Survey (FEVS) each year. The FEVS shows that EEOC employees continue to like the kind of work they do, believe their work is important, are willing to give extra effort to get a job done, and are looking for ways to do their jobs better. EEOC participated during the first wave of the 2015 FEVS administration from April 27, 2015 to June 5, 2015. EEOC's response rate for the 2015 FEVS was 60.9 percent, the agency's highest since fiscal year 2011 and 5.8 percentage points over the agency's 2014 response rate. In addition, EEOC's response rate is 11.2 percentage points higher than the government-wide response rate of 49.7 percent. EEOC attributes the increase in the agency's response rate to a robust communications strategy and an intense focus on the top four areas employees expressed as concerns, according to the fiscal year 2014 FEVS results.

Based on the actions taken, and considering the agency's controls environment as a whole, the agency concludes that during fiscal year 2015, its financial and internal controls systems were in compliance with the Federal Managers' Financial Integrity Act (FMFIA). The agency has developed corrective action plans for all of the financial non-conformances reported in fiscal year 2015. The controls systems were effective; agency resources were used consistent with the agency's mission; the resources were used in compliance with applicable laws and regulations; and, there was minimal potential for waste, fraud, and mismanagement of the resources.

Limitations of the Financial Statements

The principal financial statements have been prepared to report the financial position and results of operations of the entity, pursuant to the requirements of 31 U.S.C. 3515 (b). While the statements have been prepared from the books and records of the entity in accordance with U.S. GAAP for Federal entities and the formats prescribed by OMB, the statements are in addition to the financial reports used to monitor and control budgetary resources, which are prepared from the same books and records. The statements should be read with the realization that they are for a component of the U.S. Government, a sovereign entity. 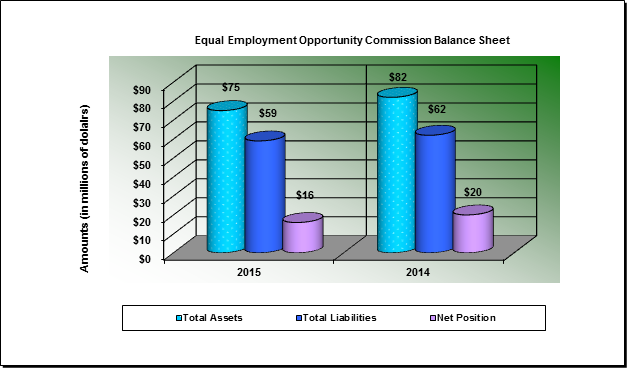 The Consolidated Statements of Net Cost presents the gross cost incurred by all programs less any revenue earned. Overall, in fiscal year 2015, EEOC's Consolidated Statements of Net Cost of Operations increased by $13 million or 4 percent. The allocation of costs for fiscal year 2015 shows that the net cost for the private sector and outreach increased by $6 million, or 1 percent, while the net cost for Federal Sector Programs increased by $8 million or 15 percent. 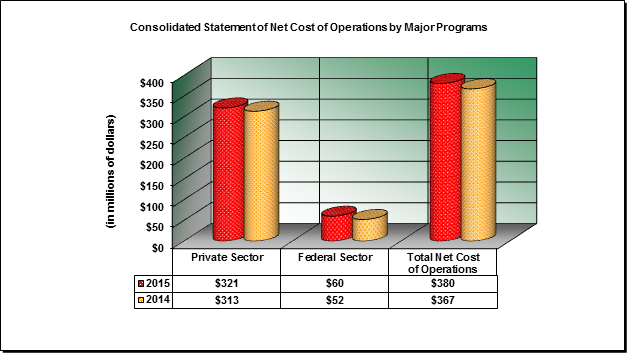 The Combined Statements of Budgetary Resources shows how budgetary resources were made available and the status of those resources at the end of the fiscal year. In fiscal year 2015, EEOC received $364.5 million in budget authority. EEOC ended fiscal year 2015 with a slight decrease in total budgetary resources. Resources not available for new obligations at the end of the year totaled $4 million and $7 million in fiscal years 2015 and 2014, respectively. The unobligated balance not available represents expired budget authority from prior years that are no longer available for new obligations. 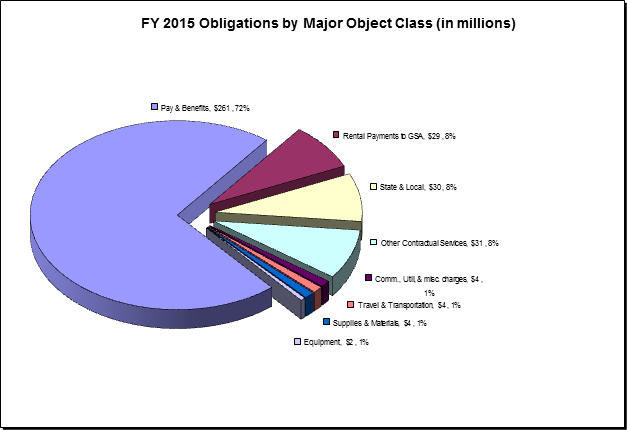 The dual axis chart below depicts EEOC's compensation and benefits versus full-time equivalents (FTE) over the past six years. EEOC ended fiscal year 2015 with 2,190 FTEs, a net increase of 92, or 4 percent, above fiscal year 2014. 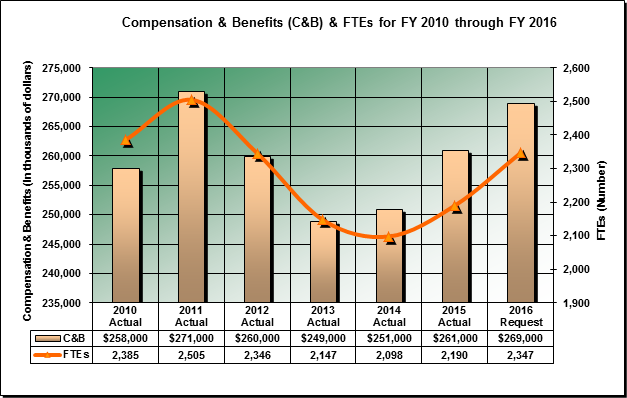 [1] To fully realize the benefits of implementing EEOC's newly adopted strategic plan, approved by the Commission in February 2012, in November 2013, the agency requested a waiver from the Office of Management and Budget (OMB) to permit the agency to forego the development of an entirely new strategic plan that would have begun in 2014. On December 10, 2013, OMB granted a deferral from the requirement to formulate a new strategic plan. Moreover, on January 22, 2014, EEOC and OMB agreed that the agency would provide an interim modification, authorized under Circular A-11 section 230.17 that would: 1) permit an extension of the agency's current plan; 2) fill the two-year gap after our Plan expires in fiscal year 2016; and 3) "position [EEOC] to join the rest of the Federal Government in releasing an updated strategic plan in February 2018" (i.e., the beginning of the next government-wide strategic plan cycle).