American Indians and Alaskan Natives in the American Workforce

As part of the Equal Employment Opportunity Commission's (EEOC) year-long 50th anniversary celebration, the agency has released American Experiences versus American Expectations, a report that illustrates the significant changes to the demographics of the American workforce since EEOC opened its doors in 1965. The report, which also highlights continuing challenges in our workforce demographics, uses EEO-1 data to track employment participation from 1966 to 2013 for several demographic groups, including American Indians and Alaskan Natives. 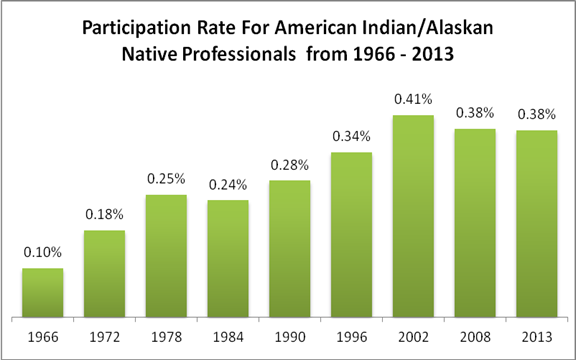 EEOC is responsible for enforcing, among other laws, Title VII of the Civil Rights Act of 1964, which prohibits discrimination based on race or national origin in any aspect of employment.  However, businesses owned by American Indian or Alaskan Native tribes are not covered by Title VII. This means that a tribal business does not have to file EEO-1 reports, even if it employs more than 100 people. Thus, the EEO-1 reports do not include the numbers of American Indians and Alaskan Natives working for tribal businesses.