Asian-Americans in the American Workforce

As part of the Equal Employment Opportunity Commission's (EEOC) year-long 50th anniversary celebration, the agency has released American Experiences versus American Expectations, a report that illustrates the significant changes to the demographics of the American workforce since EEOC opened its doors in 1965. The report, which also highlights continuing challenges in our workforce demographics, uses EEO-1 data to track employment participation from 1966 to 2013 for several demographic groups, including Asian-Americans. 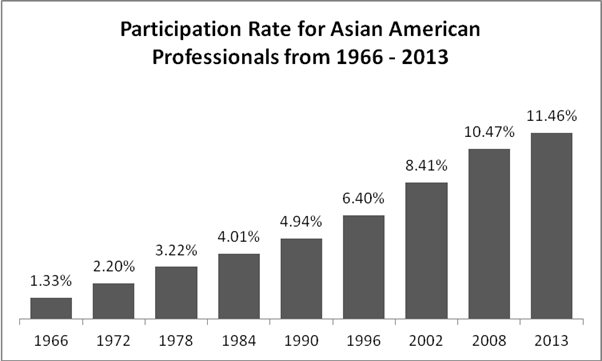 By comparison, between 1966 and 2013, Asian-American participation rates in the workforce increased from 0.5 percent to 5.5 percent (2013 EEO-1 Indicators report). In 2013, the United States' 20.8 million Asian-Americans (including Native Hawaiians and Pacific Islanders) made up roughly 7 percent of the population. They represented 30 countries and spoke more than 100 different languages.

EEOC is responsible for enforcing, among other laws, Title VII of the Civil Rights Act of 1964, which prohibits discrimination based on race and national origin in any aspect of employment. In FY 2014, race and national origin discrimination comprised 45 percent of the charges filed with EEOC under all the statutes the agency enforces. Of these race or national origin charges, Asian-Americans filed 1,213.  The issues most frequently alleged in these charges were discharge, harassment, and terms and conditions of employment.

Among noteworthy EEOC resolutions on behalf of Asian-Americans:

In FY 2014, EEOC reached more than 11,700 Asian-Americans through 240 events across the county tailored toward their communities, including Chinese, Burmese, Vietnamese, Cambodian, Micronesian, Korean, and Hmong. Additionally, EEOC provides outreach and education materials in multiple languages and has bilingual staff and interpreter services available to assist throughout our process.