The Equal Employment Opportunity Commission (EEOC) performed a demographics analysis on the broadcasting industry. The industry was defined as Standard Industrial Classification (SIC) major group codes 483 (radio and television) and 484 (cable and other pay television). Major group 483 was further divided by SIC codes 4832 (radio) and 4833 (television). The study focused on demographic changes reflected in EEO-1 reports from large establishments (1,000 or more total employees) during 1995-2000 for four occupational groups: officials and managers, professionals, technicians, and sales workers. The demographic groups examined were women and three race/ethnic minorities: blacks, Hispanics, and Asians. Comparisons were drawn with two sets of occupational data derived from the 1990 Census. The first set included key occupations found in broadcasting, but taken across all industries. The second set included those occupations found within the broadcasting industry. For both sets, the occupations were combined into the four occupational groups described above.

Minority representation (the three principal groups and "other" minorities) for the large establishments exceeded 1990 Census levels throughout 1995-2000 in three of the four occupational groups. It fluctuated for sales, possibly because this is a relatively small but growing occupational group.

For officials and managers, minority representation grew from 14.9% in 1995 to 16.5% in 2000. This was slightly below the high of 16.8% reached in 1998. Women increased their representation from 40.8% to 41.6%. Minority and women representation during this period was consistently above 1990 Census data levels. Blacks were the largest race/ethnic minority group, with representation around 9% from 1998 on.

Minority representation for technicians increased from 23% to 30.6%. Blacks accounted for much of the increase. Representation for women fluctuated and was essentially the same in 2000 as it was in 1995, and below the 1990 Census comparison levels.

For sales workers, minority representation showed uneven growth and had a 2000 level (29.8%) lower than the 1995 level (41.8%). As previously noted, sales may be highly volatile in its demographics because of relatively small size and rapid growth, as well as the small but growing number of large establishments in Broadcasting. These fluctuating levels during 1995-2000 were consistently well above the 1990 Census comparison figures. Women's representation in 2000 stood at 48.6%, compared to 48.9% in 1995, with marked fluctuations during the intervening years. Representation during this period was generally above the 1990 Census level for key occupations within Broadcasting, but consistently below the 1990 Census level for key occupations across all industries.

A brief literature review was conducted to place this study in context with published reports. Most reports in the commercial media are concerned with the portrayal of minorities and women in programming, or the demographics of small-number but highly visible occupations: actors, news anchors, and sportscasters. At least two private organizations have recently-published studies that concentrate on senior-level managers within the industry. The Federal Communications Commission (FCC) at one time collected data similar to that for EEO-1 reports, but that program was discontinued. The most recently-analyzed data (for cable) dates to 1999. The FCC has issued various reports pertaining to employment and ownership of stations within the industry.

The occupational data from the 1990 Census was contained within the Communications industry group, specifically the Other Communications (Census Industry Code 048) grouping.

Within the Census broadcast industry group, officials and managers were defined as consisting of Financial Managers (Census Occupational Code 007); Managers, Marketing, Advertising and Public Relations (013); Managers and Administrators, not elsewhere classified (022); and Management Related Occupations, n.e.c. (037). The professional occupations were Librarians (164); Authors (183); Technical Writers (184); Actors and Directors (187); Photographers (189); Editors and Reporters (195); and Announcers (198). The technicians consisted of Electrical and Electronics Technicians (213); and Broadcast Equipment Operators (228) and sales workers were in Advertising and Related Sales Occupations (256).

Establishments with SIC codes 4832, 4833, and 4841, and with 1,000 or more total employees were selected. Data are reported according to the occupational groups described above. Data were taken from annual reports spanning 1995-2000. An annual EEO-1 report is legally required of all private employers who are subject to Title VII of the Civil Rights Act of 1964 (as amended) with 100 or more employees. (Educational and certain other private organizations are excluded, but may have other reporting requirements.) Single-establishment employers file one report. Multiple-establishment employers with 50 or more employees may be require to file if they are part of a larger enterprise or engage in specified federal contracting.

Three types of data were used in comparisons represented in the charts:

The 1990 Census occupations were grouped to correspond to four occupational groups used in the EEO-1 reports: officials and managers, professionals, technicians, and sales workers.

The major race/ethnic groups are black, Hispanic, and Asian. Other minorities combined were less than one percent in any occupational category.

The representation of women and race/ethnic minorities are presented in Figures 1-4. Each figure contains four charts, each corresponding to one of the four occupational groups. Data are expressed as percentages of the data source being presented (e.g., percentage of black officials and managers in the 1990 Census (Occupation) source.) The contents of the figures are as follows:

For the EEO-1 data presented in the charts, a decline in any race/ethnic or sex group generally does not mean a decrease in the number of employees. It means that the group was not growing as fast as other groups to which it is compared.

Broadcasting employees in the four occupational groups mentioned above are mostly white. Technicians and official and managers are mostly male (86.6% and 58.4%, respectively) for large establishments in 2000. Males comprised a slim majority in 2000 for professional and sales worker jobs.

Representation for women in the large establishments during 1995-2000 was above that in the 1990 Census data for officials and managers, with a high of 41.6% in 2000. Women's representation among technicians was generally below the 1990 Census level during 1995-2000 (under 14% for four of the six years) for the large establishments. Representation during 1995- 2000 in sales and professionals was generally above the 1990 figures for key occupations within Broadcasting, but generally below the 1990 levels for key occupations across all industries (53.8% and 69.2%, respectively).

As already noted, this occupational group is relatively small but growing within an industry that was growing overall. Minority representation for the large establishments during 1995-2000 was well above 1990 Census levels, around 40% in some years. Blacks, Hispanics, and Asians were all above their 1990 Census levels, although representation fluctuated during 1995-2000.

This section provides further detail on the composition of this industry by sub-sector and firm size. This information is consistent with other characteristics and differences related to employment by establishments in radio broadcasting, in television broadcasting and in cable. Because the differences outweigh the similarities, EEOC cannot make refined statistical comparisons at this time.

With few exceptions, the activities that comprise the broadcast industry do not overlap with each other in terms of employment opportunities and labor markets. Broadcasters outside major metropolitan areas do not, other than local news, sports and weather, actually produce the material they transmit. In many instances, station employees simply replay material obtained from non-staff sources. While such firms may be more visible to the public because of their broadcast activity, their employment practices cannot be analyzed in great detail.

Based on EEO-1 data for 2000, 547 radio stations filed annual reports. Only seventeen, or only three percent, employed more than 250 persons. Only three stations employed 500 or more. Most employees were either in professional occupations (primarily announcers) or in sales, selling air- time.

Of the 753 television establishments, only 46, or six percent, employed more than 250 persons. The six stations employing 1,000 or more persons were either part of media giants or a large educational network Much station content is either independently produced or originates from the handful of largest establishments. Consequently the opportunity for employment and advancement in the occupations under review is limited to the handful of firms operating at that level.

The cable services section is similar, in that only a minuscule number across the country employ 1,000 or more persons. Most of those establishments are branches of a small number of media giants. This segment of broadcasting is distinguished by the higher proportion of technicians, and fewer professional workers. Accordingly, employment is more likely to be at the local labor market level. No further analysis of cable broadcasters has been done at this time.

A further issue with cable is that it includes establishments that are engaged in programming, and others that are concerned with delivering programming to consumers. In some cases a large firm will have divisions engaged in each activity. The SIC classification does not distinguish between the two.

The Charge Data System (CDS) contains information on the bases and issues involved in discrimination charges filed with the EEOC or state and local agencies. Data for SIC 483 and 484 were obtained and edited for the analysis. Frequency counts were taken for new charges by year for the primary basis and issue combinations listed in the CDS. The charts provide a summary of the most frequently cited primary issue/basis combinations by SIC code.

Within SIC code 483 (Radio and Television), the largest number of charges concern discharge and constructive discharge of women (Figure 5). Also of note are sexual and other harassment and demotion charges filed by females. The trend for all of these types of charges is either steady in number or declining for the period under study.

For SIC code 484 (Cable and Pay Television), the total number of charges has increased dramatically between 1995 and 2000 (Figure 5). A possible reason for the increase in the number of charges across this SIC code is the general expansion within the cable industry to include telephone and internet services as well as traditional cable television services. The most common issue/basis combination for the Cable and Pay Television sub-industry is "race black" discharges. Women also filed a large number of charges over this time period, although no particular issue stands out. Otherwise, the distribution of charges by basis and issue is fairly even across this SIC code. 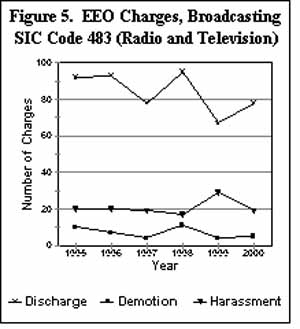 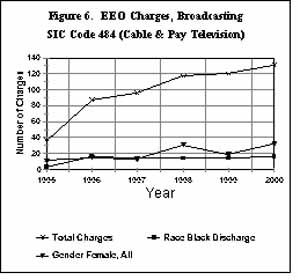 The EEOC conducted a brief review of the literature regarding equal employment opportunity issues in the broadcasting industry. A number of articles were found, but most dealt with who is seen in programming: how demographic groups are portrayed in programs, if they are visible at all; or the demographics of highly visible commentators, such as news program anchors and sportscasters.

The Federal Communications Commission (FCC) had, until 1999, required that establishments of five or more employees report employee demographics in a way similar to EEO-1 data.

The National Association of Minorities in Communications (NAMIC) published a study in 1999, A Look Towards Advancement: Minority Employment in Cable. The study indicated that minorities constituted 16.5% of the officials and managers occupational group reported by the FCC in 1997. (The figure for large establishments in this report for 1997 is 16.1%.) However, the report indicated that a NAMIC survey found only 5% minority representation for uppermost management categories (Senior Vice President to Chief Executive Officer). The study also explored employee perceptions of factors that helped or hindered career advancement.

The Annenberg Public Policy Center of the University of Pennsylvania issued a report in 2001, Progress or No Room at the Top? The Role of Women in Telecommunications, Broadcast, Cable and E-Companies, indicating that women accounted for only 9% of the board members and 13% of the top executives in communications companies. The types of firms included telecommunications (e.g., cellular telephones) and print media as well as broadcasting. In 2002 the Center published The Glass Ceiling in the Executive Suite: The 2nd Annual AAPC Analyses of Women Leaders in Communication Companies. This study identifies major firms by sub-industry and provides statistics on their women board members and executives.