Hispanics in the American Workforce

As part of the Equal Employment Opportunity Commission's (EEOC) year-long 50th anniversary celebration, the agency has released American Experiences versus American Expectations, a report that illustrates the significant changes to the demographics of the American workforce since EEOC opened its doors in 1965. The report, which also highlights continuing challenges in our workforce demographics, uses EEO-1 data to track employment participation from 1966 to 2013 for several demographic groups, including Hispanics. 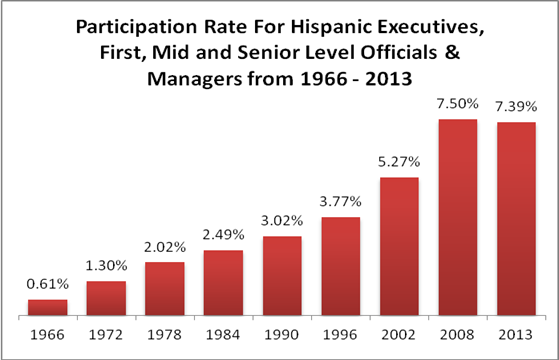 EEOC is responsible for enforcing, among other laws, Title VII of the Civil Rights Act of 1964, which prohibits discrimination based on national origin in any aspect of employment. In FY 2014, national origin discrimination comprised 11 percent of the charges filed with EEOC under all the statutes the agency enforces. Of these charges, Hispanics filed 4,469. The issues most frequently alleged in these charges were discharge, harassment, and terms and conditions of employment.

Through its 53 offices nationwide, EEOC works to stop and remedy racial barriers to equal employment opportunity such as hiring discrimination and harassment. During FY 2014, EEOC staff resolved 9,768 charges of employment discrimination based on national origin and recovered over $31.4 million for individuals along with substantial changes to employer policies to remedy violations and prevent future discrimination-without litigation. When litigation has been necessary, EEOC has filed 216 lawsuits between FY 2003 and FY 2013 alleging discrimination involving Hispanics. The alleged discrimination included trafficking, harassment, and derogatory comments.

Among noteworthy EEOC resolutions on behalf of Hispanics are the following:

EEOC has an especially vigorous Hispanic outreach program. We strive to make Hispanics - and their employers - aware of their rights in the U.S. workforce, regardless of their work authorization status. Outreach and education among Hispanic workers can be challenging because of the lang­uage barrier and their belief that resisting discrim­ination will cause them to be arrested and/or deported on immigration issues. Additionally, EEOC provides outreach and education materials in Spanish and has bilingual staff and interpreter services available to assist throughout our process.

More information on national origin discrimination is at: www.eeoc.gov/eeoc/publications/fs-nator.cfm

More information on anti-discrimination law and policies that affect immigrants is at: www.eeoc.gov/eeoc/publications/immigrants-facts.cfm