Why do we need the LEAD Initiative?

Congress and the Rehabilitation Act of 1973 require that federal agencies promote the hiring and advancement of individuals with disabilities. Moreover, Congress has called for the federal government to be the model employer. The federal government has not met this challenge with regard to people with disabilities, as demonstrated by the graph below. 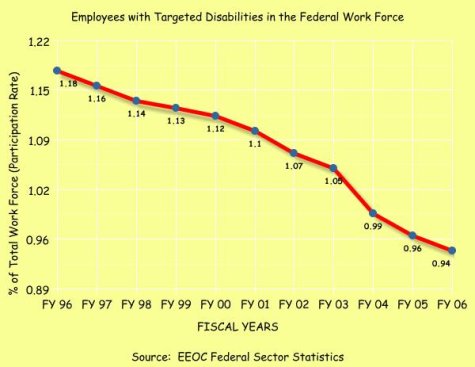 Since assuming responsibility for the federal sector, EEOC has paid particular attention to the progress of individuals with targeted, or severe, disabilities. Targeted disabilities include deafness, blindness, missing extremities, paralysis, seizure disorders, distortion of limbs or spine, mental illness and severe or intellectual impairments.

The population of individuals with severe disabilities has been steadily declining for more than a decade. The graph above reflects the percentage of the total work force that is made up of individuals with targeted disabilities (participation rate). There has also been a steady decline in the participation rate for this group in the permanent work force. The percentage of permanent federal employees with target disabilities reached its peak of 1.24 percent in fiscal year 1994 with a total of 32,337 employees. The percentage has declined each year since then, falling to 0.97 percent in fiscal year 2006, with a total of 24,086 permanent employees with targeted disabilities.

The LEAD Initiative seeks to reverse this decline. Acting Vice Chair Christine Griffin, together with EEOC staff, are reaching out to federal agencies on an on-going basis. This outreach is designed to educate federal audiences about the problem, remind them of their obligations under the Rehabilitation Act and EEOC Management Directive 715, and propose concrete solutions to address the problem.

"The federal government must set an example for all employers, public and private, that demonstrates the very best in recruitment, hiring, promotion and retention practices, in order to be the model employer. When it comes to individuals with severe disabilities, our example needs serious improvement." – Acting Vice-Chair Christine M. Griffin