This FY 2011 Performance and Accountability Report Highlights (PAR Highlights) was prepared in accordance with the Reports Consolidation Act of 2000 and the Office of Management and Budget's (OMB) Circular A-136, Financial Reporting Requirements.

The U.S. Equal Employment Opportunity Commission (EEOC or Commission) is the leading federal law enforcement agency dedicated to eradicating employment discrimination on the basis of race, color, national origin, sex, religion, pregnancy, age, disability, and family medical history or genetic information. The agency began its work more than 45 years ago and while there have been significant changes in society and the workplace, the public continues to rely on the EEOC to carry out its responsibility to bring justice and equal opportunity to the workplace.

The FY 2011 PAR is based on EEOC's current modified Strategic Plan for FY 2007 through FY 2012, which is located at: http://www.eeoc.gov/eeoc/plan/strategic_plan_07to12_mod.cfm. Following the enactment, on January 4, 2011, of the Government Performance and Results Act Modernization Act of 2010 (GPRAMA), the agency began a concerted effort to develop a new Strategic Plan for implementation in FY 2012. The results reported in this PAR, however, are linked to the performance measures contained in the agency's current modified Strategic Plan, which were in effect during FY 2011.

The current Strategic Plan provides one Strategic Objective: Justice, Opportunity and Inclusive Workplaces. The performance measures under this Strategic Objective include two long-term, six annual, and one efficiency measure. EEOC achieved or exceeded its targets for five measures and did not meet the targets for three other measures. The Commission intends to assess all of the agency's current measures during the overall strategic planning assessment for its new Strategic Plan.

The agency's nine performance measures are directly related to its key front-line enforcement operations—processing private sector charges, litigating private sector cases, and conducting hearings and appeals of federal sector cases—in order to achieve its strategic objective of ensuring that employment opportunities are not based on impermissible factors and encouraging inclusive workplaces nationwide.

The first two of these measures seek to identify the degree to which the agency's enforcement programs enhance the workplace for other employees when it obtains relief for the people who originally claimed employment discrimination, as well as how efficient the Commission was in obtaining that broad relief. As noted in the table below and further described in the Performance Section of the PAR, the agency was extremely successful in achieving results for these two measures, when compared to the established targets. The Commission will reevaluate the utility of maintaining these performance measures and the associated targets established for FY 2012 in conjunction with its Strategic Plan development process.

The following measures for which EEOC either met or exceeded its objectives also reflect key aspects of the agency's enforcement and litigation programs. They involve the agency's success in:

Completing a high percentage of its federal sector appellate cases within 180 days or less, remains a challenge for the agency, which fell short of its intended goals for this measure in FY 2011. Nevertheless, the EEOC is committed to reducing its appeals inventory moving toward to the final goal in FY 2012. The results for these measures are summarized below.

EEOC's final two measures involve the resolution of private sector charges and federal sector hearings within 180 days or less. Because of a continued emphasis on reducing the large, pending inventory, along with increasing workloads, and the need for additional resources, the Commission did not meet its FY 2011 targets for these measures. However, it is anticipated that through its multi-year approach to reducing the pending inventory, the agency will make progress toward improving its performance and meeting these goals. These measures are being evaluated by the Commission as part of its strategic planning efforts.

The results for these measures are summarized below.

In FY 2011, the EEOC produced historic levels in its year-end results. Most notably, the pending inventory of private sector charges was reduced by more than 8,000 charges over the FY 2010 level, bringing the level to 78,136, which is the first reduction in inventory since FY 2002. These results were achieved despite having received a record number of receipts, 99,947 charges. A total of 112,499 charges were resolved - an increase over the 104,999 charges resolved in FY 2010.

In FY 2011, the EEOC secured more than $58 million in relief for parties who requested hearings in the federal sector. There were a total of 8,113 requests for hearings, more than the 7,707 received in FY 2010. Additionally, the Commission's hearings program resolved a total of 7,672 complaints.

During the last fiscal year, the EEOC received 5,176 appeals of final agency actions in the federal sector, 13.8% more than the 4,545 such appeals received in FY 2010. This represented the largest percentage increase in receipts in more than 15 years. In FY 2011, the EEOC applied a more balanced approach to the resolution of the newest and oldest appeals. The agency resolved 4,510 appeals, including 54.4 percent of them within 180 days of their receipt.

The Commission believes that securing changes in employment policies, practices, and procedures through enforcement programs has a positive impact beyond the immediate victims of discrimination to all individuals in the affected workplace. Through EEOC enforcement programs in both the private and federal sectors, 5.4 million individuals benefitted from workplace improvements. This is substantially above the annual target established in Long-Term/Annual Measure 1 for FY 2011.

In FY 2011, EEOC field offices completed work on 235 systemic investigations resulting in 35 settlements or conciliation agreements, recovering $8.6 million. In addition, 96 systemic investigations were resolved with reasonable cause determinations. In FY 2011, the Commission filed 23 lawsuits – compared with 20 in FY 2010 - with at least 20 known or expected class members. These were 9 percent of all merits filings, and are the largest volume of systemic suit filings since tracking started in FY 2006.

The work of the Commission is made more efficient with interagency coordination and to this end, the EEOC has established active and ongoing relationships with other agencies as well as the White House. Coordinating with partners allows shared resources, information and ideas, resulting in a greater impact on many different communities and issues. In FY 2011 these efforts included EEOC participation in the Asian American and Pacific Islander (AAPI) Task Force,, the National HIV/AIDS Strategy, the National Reentry Council and theWhite House Equal Pay Task Force .

The agency's outreach programs reached nearly 540,000 persons in FY 2011 – an increase over approximately 250,000 in FY 2010. The EEOC participated in 6,264 no-cost educational, training, and outreach events reaching almost 512,000 people. Additionally, in FY 2011, the Training Institute trained over 26,400 individuals at more than 480 events, including 320 field Customer Specific Training events with approximately 16,000 attendees.

Pursuant to the President's Executive Order 13522: "Creating Labor-Management Forums to Improve Delivery of Government Services," the EEOC established a National Joint Labor Management Council (JLMC) in addition to Councils in each of its 15 Districts, the Washington Field Office, and Headquarters. The National JLMC established three metrics to measure goal-related activities associated with implementing the Executive Order: "Improve Mission and Service Delivery", "Employee Satisfaction and Engagement" and "Improved Labor-Management Relations."

The Office of Personnel Management recognized the EEOC as one of the Most Improved Agencies in creating better working environments for their employees according to the 2011 Federal Employee Viewpoint Survey. The Commission was recognized for greatest improvement in the Leadership and Knowledge Management Index.

Based on the actions taken, and considering the agency's controls environment as a whole, the agency concludes that during FY 2011 its financial and management controls systems were in compliance with the Federal Managers' Financial Integrity Act (FMFIA). Thirty percent of the identified non-conformances were resolved during the fiscal year, and it has plans in place to resolve the remaining financial non-conformances in FY 2012. The controls systems were effective; agency resources were used consistent with the agency's mission; the resources were used in compliance with laws and regulations; and, there was minimal potential for waste, fraud, and mismanagement of the resources. 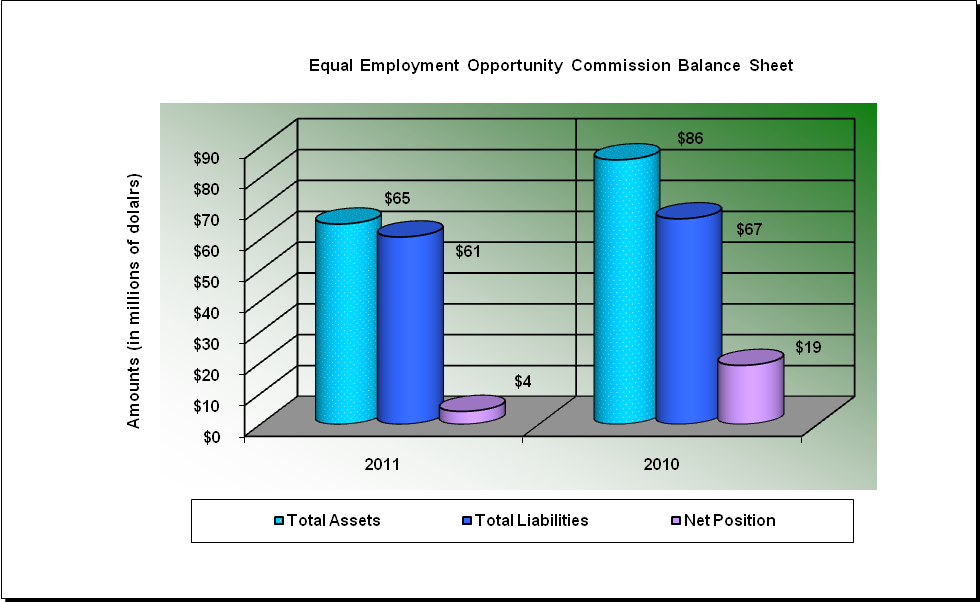 The Consolidated Statements of Net Cost presents the gross cost incurred by major programs less any revenue earned. Overall, in FY 2011, EEOC's Consolidated Statements of Net Cost increased by $17 million or 4 percent. The allocation of costs for FY 2011 shows that private sector resources used for enforcement and litigation increased $14 million, or 4 percent, while the Federal Sector Programs increased by $3 million or 6 percent. 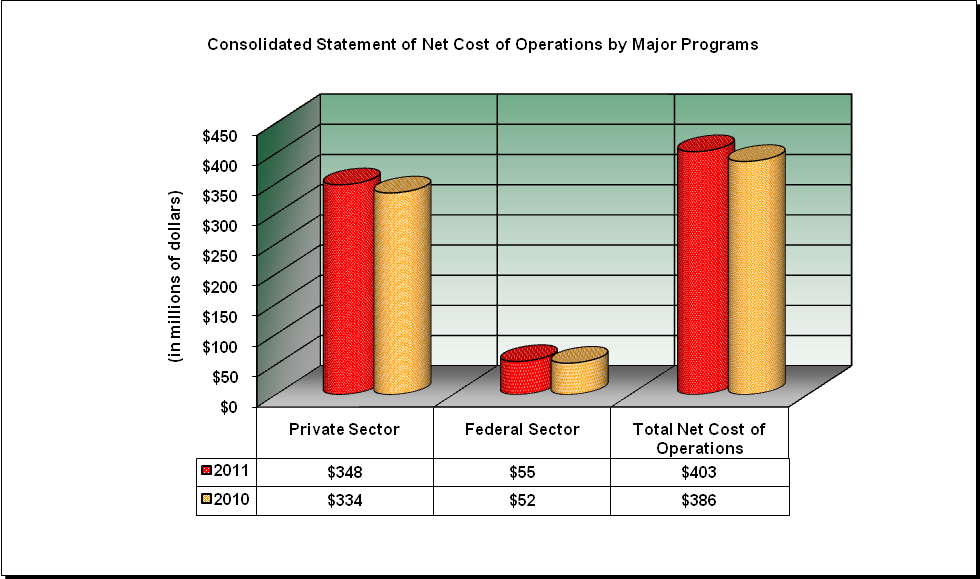 The Combined Statements of Budgetary Resources shows how budgetary resources were made available and the status of those resources at the end of the fiscal year. In FY 2011, EEOC received a $367.3 million appropriation, with a rescission of $735,000. 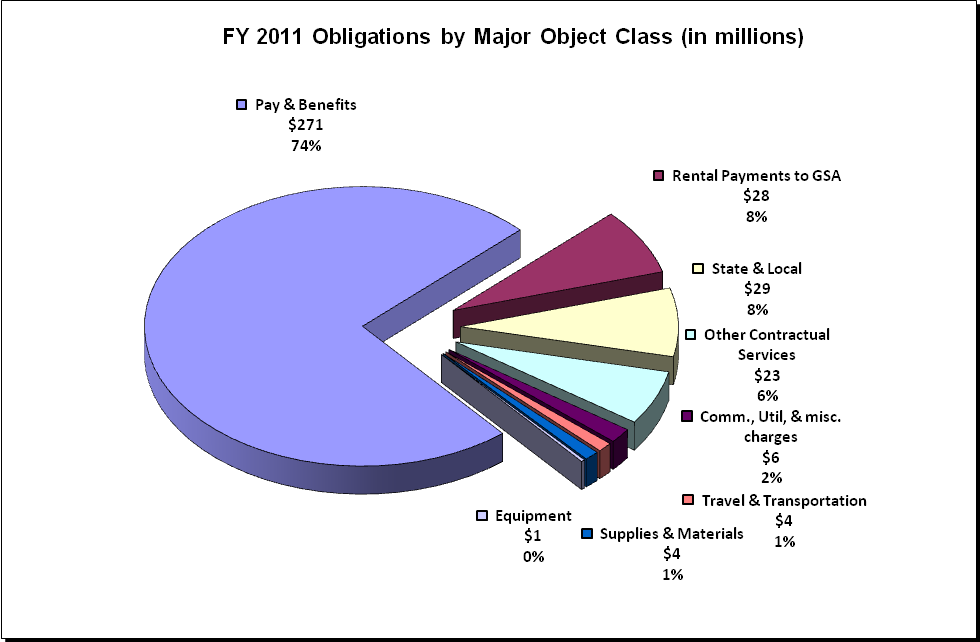 The dual axis chart below depicts EEOC's compensation and benefits versus full-time equivalents (FTE) over the past six years. EEOC ended FY 2011 with 2,505 FTEs, a net increase of 120, or 5 percent, above FY 2010. 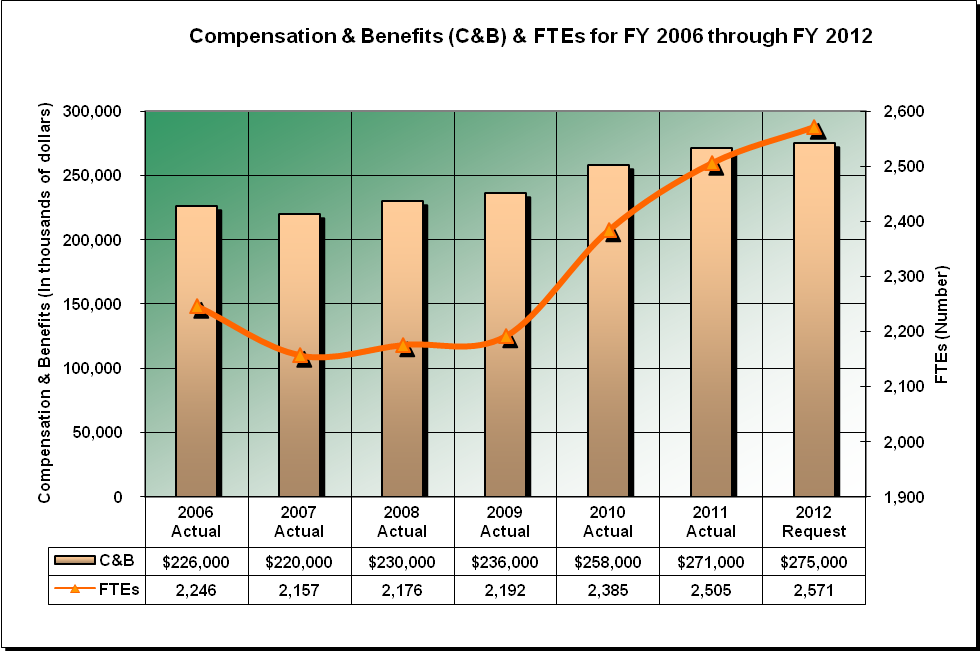