ADR as an Alternative

In accordance with our responsibility to evaluate federal sector agencies' equal employment opportunity (EEO) programs, operations, and activities, the Equal Employment Opportunity Commission's (EEOC) Office of Federal Operations conducted an analysis of the time it takes agencies to conduct investigations of federal sector EEO complaints and the cost to the government for conducting those investigations. Although this report is not all inclusive of the factors which cause overlong and costly delays, it provides the agencies with an opportunity to begin assessing their own internal operations against the goal of having a model EEO program.

Federal government agencies are required to comply with established time frames for investigating allegations of discrimination. Longstanding failures to adhere to these standards have resulted in EEOC's evaluation of agencies complaint processing operations and activities. This report compiles information from previously issued evaluative reports that address reasons for delays in investigating complaints. As EEOC continues to assess reasons for these overlong delays and other areas of non-compliance, we will share the information as appropriate to assist agencies in improving their EEO programs.

Delays in federal sector EEO complaint processing have been a longstanding concern of EEOC, other federal agencies, advocacy groups, and members of Congress. The investigation into allegations of discrimination is a key component of the formal EEO complaint process. However, lengthy delays in this process may impede the primary goal of gathering sufficient evidence to permit a determination as to whether discrimination occurred.

Agencies process federal employees' EEO complaints under regulations promulgated by EEOC at 29 C.F.R. Part 1614. These regulations establish time standards for processing complaints. Employees who are unable to resolve their concerns through counseling can file a complaint with their agency. The agency will either dismiss(1)or accept the complaint. If the complaint is accepted, the agency must conduct an investigation and issue the results of the investigation within 180 days from the date the complaint is filed.(2)

After the employee receives the investigative report, he/she may (1) request a hearing before an EEOC administrative judge who issues a decision which the employee or the agency may appeal to EEOC, or (2) forgo a hearing and request a final agency decision. An employee who is dissatisfied with a final agency decision or the agency's decision to dismiss the complaint may appeal to EEOC. The complainant or agency may also request EEOC to reconsider its decision from the appeal. The complainant also has the right to file a civil action in a federal district court.

An integral part of EEOC's strategic goals and objectives is to provide information that will help agencies become model workplaces by identifying and helping to solve EEO program deficiencies. The information provided herein describes activities during the investigative stage of the EEO process which hinder the prompt and effective processing of formal EEO complaints, and offers suggestions for improvement.

To assist agencies in ensuring their EEO programs and practices comply with statutory and regulatory requirements, EEOC's Office of Federal Operations staff gathered and analyzed information from previously issued EEO program evaluation reports, and annual reports on the federal workforce. The reports contained findings which addressed, among other things, reasons for delays in investigating discrimination complaints as well as the time and cost associated with conducting federal sector investigations.

To determine the time and cost associated with federal sector investigations, we analyzed data from EEOC's Annual Report on the Federal Work Force for FY 1993 through FY 2003. Data on the administrative processing of federal sector complaints is provided to EEOC by federal agencies subject to 29 C.F.R. 1614. In addition to the analysis of this data, we reviewed recent reports issued by EEOC's Office of Federal Operations which addressed, among other things, the issue of overlong delays in processing federal sector investigations at certain agencies. We also reviewed reports issued by the U.S. General Accounting Office, reports issued by agencies' Office of Inspector General, as well as other agency specific reports and studies involving EEO program operations and activities.

EEOC's Chair, Cari M. Dominguez, highlighted in her recent letter transmitting, to each agency head, EEOC's Annual Report on the Federal Workforce for FY 2003, three areas for agencies to consider in ensuring the development of model EEO programs, one of which was timeliness of EEO complaint processing. Certain agencies were urged to take appropriate steps to promote case management practices which would improve the time it takes to investigate complaints of discrimination. Over the past eleven years agencies have investigated 160,278 complaints. Of the 160,278 investigations, it has taken from an average low of 171 days in FY1993 to an average high of 343 days in FY 1997 to process a complaint from filing to issuance of the investigative report to the complainant. In FY 2003, agencies reported that it took an average 267 days to conduct an investigation. See Appendix. 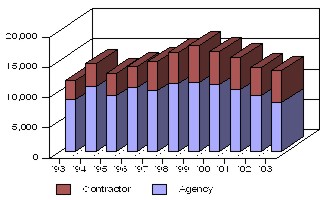 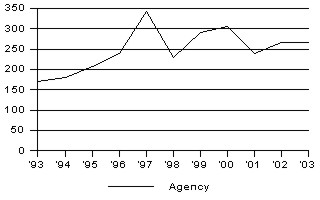 EEOC's standard time frame at 29 C.F.R. 1614.108 (e) and (f) requires agencies to complete their investigations within 180 days of the date of filing of an individual complaint and provide the complainant with a copy of the investigative file. An analysis of agencies' investigative time frames revealed that not only did certain agencies not meet the regulatory time frame, they greatly exceeded the government-wide average. Accordingly, EEOC visited some of those agencies, identified reasons for delays in investigating discrimination complaints, and issued the results in reports to the agencies. We have outlined below some of the reasons identified in our reports that contributed to those delays.

Results: Too little time to
conduct the actual
investigation

Results: Delays the start of
the investigation

Results: Delays actual
investigation and issuance of
the investigative report

Not only do unnecessary and time consuming processes hinder the prompt investigation of federal sector complaints, they may also result in additional cost to the government in salaries and other costs associated with the investigation. For example, at one agency we found that the time spent by agency staff in repeated reviews of the same contractor investigative plan, in some cases, still resulted in agency staff having to supplement the investigation after the contractor's final investigative report was provided to the agency. Therefore, additional costs are incurred by these repeated reviews of investigative plans and in supplementing the contractors final work product. Not only may delays in investigating complaints impede the primary goal of gathering sufficient evidence to permit a determination as to whether discrimination occurred, it may also affect the livelihood and well being of individuals who believe they have been discriminated against.

Each agency bears the responsibility to ensure full compliance with EEOC regulations, orders and other written instructions which includes requirements for investigating complaints and establishing model EEO offices. We recommend that agencies annually conduct self-assessments of EEO program operations and activities to identify areas of inefficient, ineffective and costly practices.(5)We have also outlined below some actions to help reduce the time it takes to conduct investigations and further any efforts toward ensuring a model EEO program.

Ensure EEO program is staffed with employees who have the necessary knowledge, skills, and abilities.
Carefully examine procurement processes to identify and eliminate unnecessary and time consuming steps, and explore other methods of obtaining investigative services such as the GSA Schedule.
Establish staff incentives for timely processing and consequences for untimely processing.
Eliminate unnecessary and time consuming internal procedures.
Develop or improve internal tracking systems with reliable data necessary to aid staff in monitoring time spent at each stage of the formal complaint process.
Establish incentives and consequences for outside contractor performance.
Ensure agencies' EEO policy provides for full cooperation of employees under his/her supervision with EEO office officials such as EEO Counselors, EEO Investigators, etc., to gain timely compliance from complainants and agency management officials.
Investigators should establish deadlines for receipt of information.
Where appropriate parties fail to timely comply with the investigator's request for information, or attendance of witnesses, the investigator shall notate the investigative file concerning such failures, and issue the report of investigation to the agency without the information.

Despite additional instructions provided by EEOC for determining the cost of investigations, significant cost disparities continue to exist in the data reported by agencies. Accordingly, the magnitude of investigative costs to the government cannot be accurately assessed unless agencies report the costs in a uniform manner. Table 3 shows the cost to the government as reported by federal sector agencies for the 160,278 investigations conducted from FY 1993 through FY 2003. 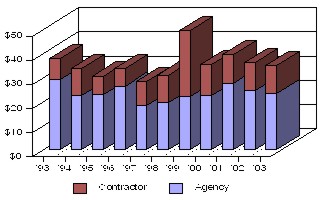 Federal government executives as well as the President and Congress make policy decisions on program priorities and allocate resources among programs. These officials need cost information to compare alternative courses of action and to make program authorization decisions by assessing costs and benefits. They also need cost information to evaluate program performance. Managerial cost accounting information provides both internal and external agency users with relevant and reliable information relating cost outputs and activities, thus, increasing the transparency of EEO program operations. Based on this information, program managers can respond to inquiries about the costs of the activities they manage. Cost information also assists program managers in improving operational economy and efficiency.(6)

ADR as an Alternative

To avoid timely and costly investigations, agencies should try and resolve disputes at early stages of the EEO process. In addition to traditional counseling activities, agencies should promote and expand alternative dispute resolution (ADR) as a means of avoiding more formal dispute resolution processes. Used properly, ADR can provide fast and cost effective results while at the same time improving workplace communication and morale. In 1999, EEOC amended its regulations to require federal agencies to establish ADR programs within the EEO process. EEOC's Office of Federal Operations is currently working on a study of the effectiveness of ADR in the federal sector which it plans to issue in the near future.

If you have any questions or concerns regarding this report, please contact Catherine M. McNamara, Acting Director, Federal Sector Programs, at 202-663-4528, catherine.mcnamara@eeoc.gov, or Joyce A. Keyes, Program Analyst, 202-663-4620, joyce.keyes@eeoc.gov. As always, we look forward to working with you in our continued efforts to assist agencies in meeting their EEO goals and objectives.

1. There are several reasons an agency may dismiss a complaint including the complainant's failure to state a claim, timely contact a counselor, provide information to the agency, accept a full settlement offer; or the inability to locate the complainant. See 29 C.F.R. §1614.107.

3. Contractors are generally only involved in steps 4 and 5 of the investigative process.

4. Agency reports and complaint files did not contain information from which we could glean reasons for delays or quantify the extent of the delays attributable to complainants, investigators, and management officials. Delays from beginning to the end of the investigative process were determined through interviews with investigators, management officials, documentation supplied by interviewees or contained in some complaint files.

6. Statutory authority for achieving improvements in federal agency accountability and program management is provided through laws such as the Chief Financial Officers Act of 1990, Government Performance and Results Act of 1993, the Government Reform Act of 1994, the Clinger-Cohen Act of 1996, formerly known as the Information Technology Management Reform Act, and the Federal Managers' Financial Integrity Act of 1982.

7. Achieving full compliance with the Budget and Performance Integration initiative of the President's Management Agenda requires that, "[F]ull budgetary cost is charged to mission accounts and activities."