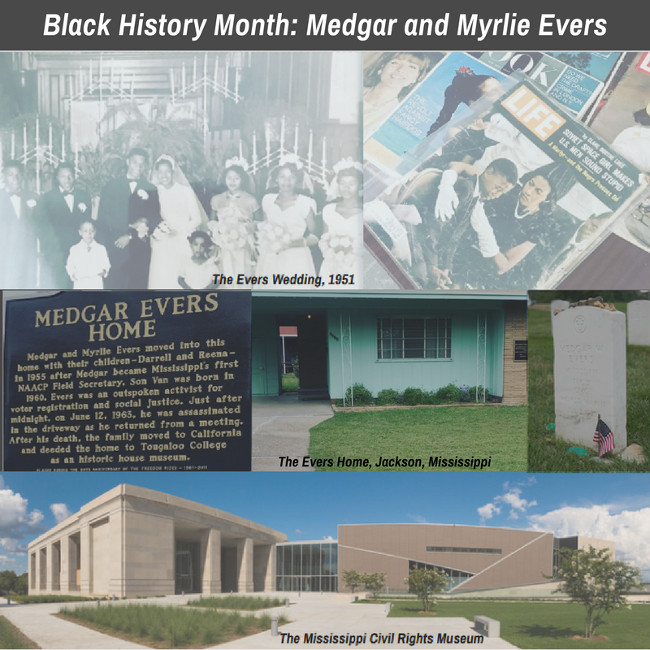 Myrlie Evers-Williams stated, "I have reached a point in my life where I understand the pain and the challenges; and my attitude is one of standing up with open arms to meet them all."

Mrs. Evers-Williams knows, and her late husband Medgar Evers knew, all too well about standing up to challenges and injustice. They are true civil rights champions. The Evers challenged the segregation of the state-supported public University of Mississippi, and worked for voting rights, economic opportunity, access to public facilities, and other efforts to end the evil reign of Jim Crow.

As the first field secretary for the National Association for the Advancement of Colored People (NAACP) for Mississippi, Mr. Evers helped organize boycotts and set up new local NAACP chapters. He was involved with James Meredith's triumphant struggle to enroll in the University of Mississippi in the early 1960s. He helped organize the Biloxi wade-ins-protests against segregation of the city's public beaches on the Gulf Coast-from 1959 to 1963.

A father of three, Mr. Evers was gunned down in his own driveway in June 1963, just hours after President John F. Kennedy's nationally televised civil rights address. He was just 37 years old. His racist assassin was finally convicted of the murder in 1997.

The story of Medgar Evers' life and death is told in the brand-new Mississippi Civil Rights Museum in Jackson. Besides, of course, telling Medgar Evers' story, the museum shows the visitor the long, righteous struggle by African-Americans for the rights, liberty, and peace they should always have enjoyed-with a focus on Jackson and Mississippi, which were central to the civil rights movement in many ways.

The central gallery in the heart of the museum is called "This Little Light of Mine," after the cherished old spiritual.

At the EEOC, we are proud to continue advancing civil rights in America every day-year in and year out. But we can, and should, take solemn pride that we are following in the Evers' footsteps as we carry out our mission.

I encourage everyone to make that pilgrimage to Jackson if you can. (And, while you're there, please stop by and say hello to the EEOC's Jackson Area Office!) If you can't get there physically, then at least make that pilgrimage in your mind. Especially during Black History Month, when the nation honors the countless contributions by African Americans-including, sadly, too many instances of what Lincoln called "so costly a sacrifice upon the altar of freedom." Let us take ever-increasing devotion to our cause-"This Little Light of Ours"-and keep that light glowing and growing.