This month, we have been recognizing National Women's History month. The theme for this year's celebration is "Honoring Trailblazing Women in Business and Labor."

You might wonder what the iconic photograph of the suffragists has to do with this year's theme. This year marks 100 years since the women pictured below, frustrated by the already 69 year-old effort to obtain the right to vote, tried a new more radical tactic:  protesting as "Silent Sentinels" in front of the White House.  Because they staged their picketing deliberately at the advent of U.S. involvement in the First World War - their protests were highly controversial.  They were arrested and imprisoned.   When arrested, many of those suffragists went on hunger strikes, leading to forced feedings which, as that information made it into the press, led to greater public sympathy for their cause. After many years of struggle, the 19th Amendment granting women suffrage was finally ratified in 1920. 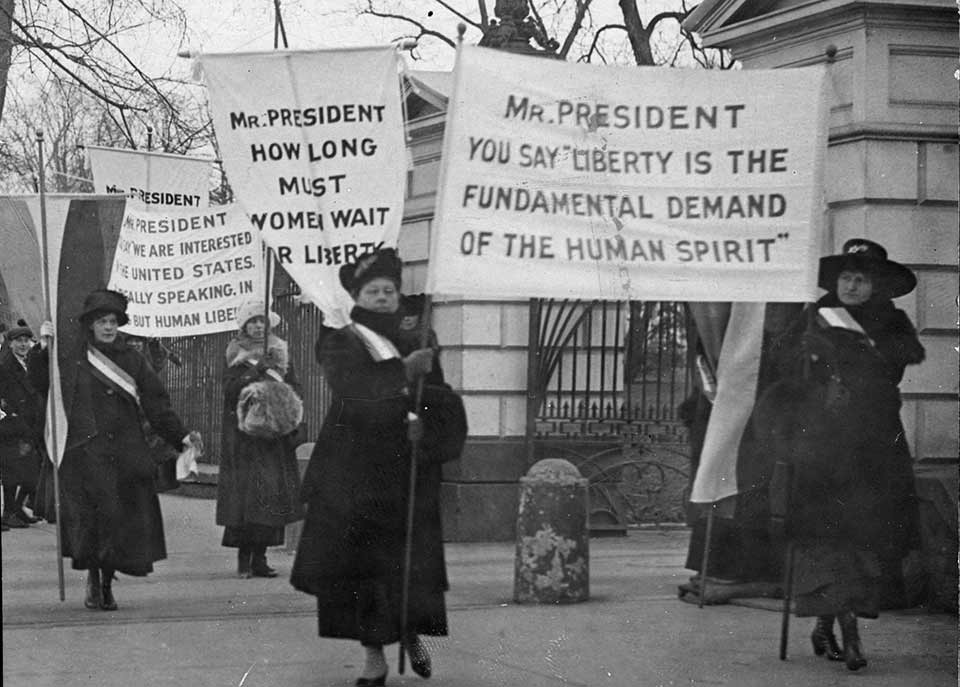 The leader of the group considered the more radical of the suffragists was Alice Paul, and she and her fellow suffragists operated out of a mansion on Capitol Hill known as the Sewell-Belmont house.  For years it has been an often overlooked historical treasure in the nation's capital.  Last year it was designated as the newest national historic monument to women's history, renamed the Belmont-Paul House, and brought under the auspices of the National Park Service.  Because of my love of history, I cannot resist urging all of you to visit that museum.  Or, you can visit it online: https://www.nps.gov/bepa/learn/womens-suffrage.htm

We can draw a line from the suffragists and their tactics and efforts to pass the 19th Amendment to the civil rights movement and the work to pass the Civil Rights Act of 1964 some 44 years later.  Of course, issues of race were not divorced from the suffrage movement and it took the Voting Rights Act of 1965 to complete the franchise for women of color.  So, in thinking about the contributions of so many women to the work of the EEOC, I want to remember four giants of our own, who, sadly, have passed on, and honor them as the trailblazers in "Business and Labor" that they were. These four brought the same zeal for justice that Alice Paul, Ida B. Wells and their fellow suffragists brought to the fight for suffrage.

Julia Cooper Mack is known mostly as the first African American woman to be nominated by a U.S. President and confirmed by the Senate to sit on a state equivalent court of last resort-the D.C. Court of Appeals. Before taking that post, she headed the Appellate Division of EEOC. Judge Mack passed away in 2014.

Beatrice Rosenberg came out of retirement as head the criminal appellate division of the Department of Justice to head EEOC's Appellate Division after Judge Mack went to the D.C. Appeals Court. She was a legend in federal government circles. In her job at the Justice Department, she argued over 30 cases in the Supreme Court at a time when there were few female attorneys. At EEOC, she was a formidable mentor and teacher. Today, the Beatrice Rosenberg Award for Excellence in Government Service is awarded annually to a D.C. Bar member for outstanding service in a government job and service to the Bar and legal community.  Beatrice passed away in 1989.

Ruth Weyand was Equal Pay Counsel at the EEOC from 1977 until her untimely death in an auto accident in 1986. She worked on major issues affecting women, such as pension parity, and after the Supreme Court's disastrous opinion in General Electric Co. v. Gilbert, which held that exclusions of pregnancy coverage do not constitute sex discrimination, Ruth headed the effort to pass the Pregnancy Discrimination Act of 1978.

Aileen Hernandez was the very first woman appointed to be EEOC Commissioner. When President Lyndon Johnson named her to the Commission, she was not only the first, but the only woman serving as commissioner. Her tenure lasted only two years because of her impatience with the narrow scope of the EEOC's coverage-she wanted to address housing and education concerns, as well as employment. Following her EEOC tenure, she became a vice president and later president of NOW, the National Organization of Women. Ms. Hernandez just passed away on March 1 of this year, at the start of Women's History Month.

I hope you have used this month to recognize trailblazing women in your communities-whether stalwarts of EEOC or not.  And, as the 100th anniversary of the 19th amendment is just three years away - check into your own family history - you might find a suffragist there to honor.