WASHINGTON--Chai Feldblum, a former Georgetown University law professor, was sworn in today as a Commissioner of the U.S. Equal Employment Opportunity Commission (EEOC).  Jacqueline A. Berrien, who became Chair of the EEOC earlier that morning, administered the oath of office.

Feldblum was nominated for the position of Commissioner of the EEOC on Sept. 15, 2009.  She received a recess appointment on March 27, 2010, and will serve until the end of  the Congressional session in 2011 absent confirmation by the Senate.

Feldblum has been a professor of law at Georgetown University Law Center since 1991, where she founded the Federal Legislation and Administrative Clinic, a program designed to train students to become legislative lawyers.  As director of the clinic, she has worked with organizations such as Catholic Charities U.S.A., the David L. Bazelon Center for Mental Health Law, and the Epilepsy Foundation. Additionally, she was the Co-Director of Workplace Flexibility 2010, which advocates for flexible work arrangements, time off, and career flexibility in a manner that works for employees and employers.

Before becoming a law professor, Feldblum played a leading role in drafting the ground-breaking Americans with Disabilities Act of 1990 while serving as Legislative Counsel to the AIDS Project of the American Civil Liberties Union. Later, as a law professor, she was equally instrumental in helping with the passage of the ADA Amendments Act of 2008.

Feldblum has been a leading scholar and public intellectual in the efforts to achieve equality for lesbians, gay men, bisexuals, and transgender people.  She has provided legal counsel on the Employment Non-Discrimination Act and other efforts to prohibit discrimination on the basis of sexual orientation and gender identity.  Feldblum will be the first open lesbian to serve as a Commissioner of the EEOC.

A graduate of Barnard College, Feldblum received her J.D. degree from Harvard Law School.  After law school, she clerked for Judge Frank Coffin of the U.S. Court of Appeals for the First Circuit and then for Supreme Court Justice Harry A. Blackmun.

"I do not think it is possible to grow up as the daughter of a Holocaust survivor and not be committed to principles of pluralism and tolerance," Feldblum said.  "My entire professional life has been focused on civil rights and social welfare rights. In my legal work and in my scholarship, I have sought to advance the civil rights of all Americans, no matter their race, creed, gender, sexual orientation or gender identity. I look forward to continuing that important work as a Commissioner of the EEOC."

Feldblum and Berrien join Commissioners Stuart J. Ishimaru and Constance S. Barker.  With the addition of nominee Victoria Lipnic, who was also given a recess appointment and will be sworn in later in April, the EEOC returns to its full complement of five Commissioners.  General Counsel nominee P. David Lopez, who was given a recess appointment, will be sworn in to his post tomorrow. 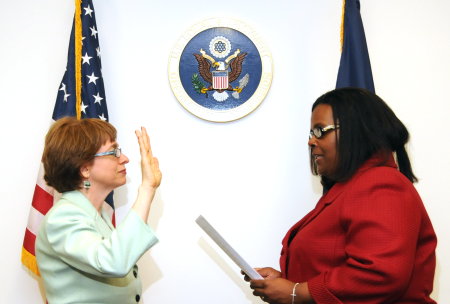