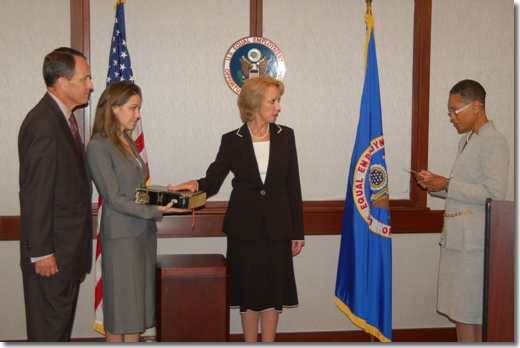 WASHINGTON â Constance S. Barker has been sworn in as a Commissioner of the U.S. Equal Employment Opportunity Commission (EEOC), the agency announced today. Ms. Barker was nominated by President George W. Bush on March 31, 2008, and unanimously confirmed by the Senate on June 27 to serve the remainder of a five-year term expiring on July 1, 2011.

"We are delighted to welcome Commissioner Barker to the EEOC," agency Chair Naomi C. Earp said. "Her knowledge and experience enhances the Commission and ensures that we are best able to address the challenges and opportunities of the twenty-first century workplace."

"I'm honored to join the EEOC, and to be entrusted with a position where I will be able to play a direct role in combating workplace discrimination and advancing an America where all may compete equally," Commissioner Barker said.

Commissioner Barker's experience in labor and employment law includes positions in both the private and public sectors. As a shareholder at Capell & Howard, P.C. in Montgomery, Ala., she provided advice regarding the prevention of discrimination complaints and defended clients in employment discrimination lawsuits. Her public-sector experience includes four years as an assistant district attorney for the 11th and 13th Judicial Circuits of Alabama, one year as a judge for two Alabama localities, and 11 years as the general counsel for the Mobile County Public School System.

The EEOC enforces federal laws prohibiting employment discrimination. Further information about the Commission is available on its web site at www.eeoc.gov.