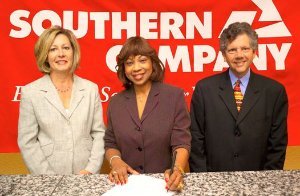 ATLANTA - Southern Company, its affiliates, and the U.S. Equal Employment Opportunity Commission (EEOC) today announced the signing of a National Universal Agreement to Mediate (NUAM) to informally resolve workplace disputes through Alternative Dispute Resolution (ADR) prior to an EEOC investigation or potential litigation.

The national mediation pact is EEOC's 73rd such agreement with a major employer (mostly Fortune 500 companies) and continues a two-year trend of Corporate America signing on to the Commission's widely acclaimed ADR program. The EEOC has signed previous NUAMs with Ford Motor Company, Intel Corporation, ConAgra Foods, Albertsons, International Dairy Queen, Tyson Foods and dozens of other major employers. Additionally, agency district offices have entered into more than 600 local mediation agreements with companies at the state or regional levels within their respective geographic jurisdictions.

"The Commission is pleased to welcome one of the country's largest power suppliers as our latest mediation partner," said EEOC Chair Cari M. Dominguez, who has made the promotion and expansion of mediation the centerpiece of her Five-Point Plan to improve the agency's operational efficiency and effectiveness. "More and more employers are coming to realize the benefits of mediation to amicably and quickly resolve employment disputes."

Christopher S. Miller, Southern Company's Vice President of Employee Relations and Associate General Counsel, said: "Southern Company affiliates are committed to equal employment opportunity and to workplace issue resolution. The NUAM, which is part of that commitment, will benefit employees and the company alike by allowing the participants more opportunity to reach a satisfactory resolution."

Under the terms of the NUAM, all eligible charges of discrimination filed with the EEOC naming a Southern Company participating company as the employer/respondent will be referred to the EEOC's mediation unit, as appropriate. The company will designate a corporate representative to handle all inquiries and other logistical matters related to potential charges in order to facilitate a prompt scheduling of the matter for EEOC mediation.

Since 1999, when the National Mediation Program was fully implemented, EEOC has mediated more than 50,000 cases with approximately 70 percent being successfully resolved in an average time of 83 days -- nearly half the time it takes to resolve a charge through the investigative process. Additionally, EEOC's experience over the years has shown that 13-20 percent of mediated cases are resolved based solely on a non-monetary benefit. A comprehensive survey conducted by independent researchers showed that 91 percent of charging parties and 96 percent of employers would use EEOC's mediation program again if a charge was filed -- irrespective of issues, bases, size of employer or whether the charge was resolved or not. The study, available on the agency's web site, concluded that the parties saw the EEOC's process as fair, neutral and efficient.