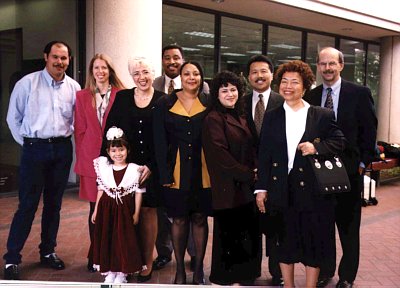 The charging parties and the EEOC team.

SAN JOSE, CALIFORNIA - The United States Equal Employment Opportunity Commission and Tanimura & Antle, one of the largest lettuce growers/distributors in the United States, announced today that they reached a $1,855,000 voluntary settlement, approved by U.S. District Court Judge James Ware in San Jose, California. The settlement through a Consent Decree avoids protracted litigation by the EEOC on behalf of two employees and a class of current and former Tanimura & Antle employees who were allegedly subjected to sexual harassment and retaliation in Salinas, California, and Yuma, Arizona.

In its federal court complaint, the EEOC alleged that a Tanimura & Antle production manager subjected a female employee, Blanca Alfaro, to quid pro quo sexual harassment, i.e. required sexual favors as a condition for employment and the receipt of job benefits. The EEOC alleged that Alfaro was subsequently subjected to a hostile work environment, which included constant unwelcome sexual advances by that production manager and another management employee. The Commission further alleged that Alfaro was discharged in retaliation shortly after complaining about the unwelcome advances.

Based on its investigation, the EEOC also alleged that other workers were subjected to similar types of harassment by managerial and supervisory personnel and were retaliated against for complaining about the repeated harassment. The company's retaliatory conduct allegedly included the creation of a hostile work environment and, in some cases, actual discharge.

The EEOC further alleged that Tanimura & Antle unlawfully retaliated against one male employee, Elias Aragon, when he complained about the sexual harassment of Ms. Alfaro. This retaliation included verbal abuse and suspension without cause, until he was ultimately discharged.

Under the Consent Decree, which will be enforced over the next three years, Tanimura & Antle may pay up to a total sum of $1,855,000 as damages to be allocated to Alfaro, Aragon and current and former applicants and employees employed by Tanimura & Antle from September 25, 1994 to February 8, 1999 for their claims of alleged sexual harassment, sex-based harassment and retaliation. Alfaro's and Aragon's specific recoveries remain confidential by court order. Claims for compensation under the decree must be filed between March 1, 1999 and July 31, 1999 with the EEOC or its designated agents. The company agreed that it will revise as necessary its existing sexual harassment policy and the handling of complaints of harassment. Tanimura & Antle will provide mandatory sexual harassment training to all of its employees, including supervisors and managers. Tanimura & Antle, with headquarters in Salinas, has additional operations in Oxnard and Huron, California (near Fresno) and Yuma, Arizona.

Ida L. Castro, the Chairwoman of the EEOC, said: "This settlement represents a precedent - setting effort by the EEOC with regard to sexual harassment in the agricultural industry in California. This is a fair and equitable settlement that helps create an agricultural workplace that is free of sexual harassment. The lawyers representing both the EEOC and Tanimura & Antle insisted on principle, but recognized the need to find common ground. This is a win-win situation for the company, for the EEOC, and, most of all, for the employees."

EEOC General Counsel C. Gregory Stewart said: "The importance of the injunctive non-monetary relief elements of this settlement -- the no harassment policy, the training, or other items -- cannot be overestimated. We are optimistic that this Decree will make concrete differences in the day-to-day lives of the migrant farmworkers at Tanimura. If we are right about this, then the benefits to both the mission of our agency and the objectives of the agricultural community can be huge."

Tanimura & Antle President Rick Antle stated, "This settlement is indicative of our commitment to our employees. Tanimura and Antle does not and will not tolerate sexual harassment in its workplace. While we were never able to substantiate the allegations made by the EEOC in this case, we feel it is in the best interest of our current and former employees to resolve this matter by establishing a claim fund for individuals who may have suffered from sexual harassment while under our employ. In an effort to better serve employees in the agricultural industry, we have agreed to contribute up to $400,000 to charitable organizations that address women's and employees' rights in the geographic areas where our Company operates. We hope this endeavor will increase services provided to the agricultural employee who is often a hidden but vital contributor to the California economy."

Mike Antle, Vice-President of Operations for Tanimura & Antle, added, "Treating employees with dignity and respect is the basis of our employee-relations philosophy. Our bilingual training programs echo this philosophy as will the additional training that will take place under the settlement. In particular, we will provide employees with the skills to recognize and prevent sexual harassment. This will entail altering perceptions of what is and is not acceptable conduct in the agricultural work-place, potentially altering long-held stereotypes regarding male and female interactions that have been in existence for centuries."

Carmen Ponce, Vice-President for Human Resources, noted, "The settlement reached in this case is due to the Tanimura & Antle families putting their employees first which has continuously earned them the distinction of being the foremost innovative employer in the agricultural industry. This settlement has far reaching implications in that it gives the agricultural industry a wake-up call about its role in educating agricultural employees about their rights, about internal complaint procedures and about how to respond to uncomfortable situations in the workplace. In performing this role, employers like Tanimura & Antle afford themselves the affirmative defenses recently given to us by the Supreme Court, at least as to claims pertaining to a hostile work environment."

William R. Tamayo, EEOC's Regional Attorney in the San Francisco District Office which filed the case, added, "Agribusiness is California's largest industry and employs a million workers each year. Farmworker women have raised civil rights issues to the EEOC, and consequently, the Commission has made sexual harassment in the agricultural industry a priority for civil rights enforcement. This Consent Decree and Tanimura's resolve to eradicate sexual harassment serve as models for ensuring that these workers, particularly immigrant women who don't speak English, are protected."

Susan L. McDuffie, EEOC San Francisco District Director, stated, "This Settlement provides immediate compensation to women who suffered discrimination. Employers in the agricultural industry must realize that sexual harassment and retaliation will not be tolerated. This settlement provides protection for migrant farm workers and it ensures fairness and cooperation and dignity for every employee at Tanimura & Antle. This is a good result."

Jose Padilla, Executive Director of California Rural Legal Assistance, added, "Our office, along with the Women's Employment Rights Clinic of Golden Gate University Law School, represented Blanca Alfaro, an individual in this case, and we were able to obtain a satisfactory confidential settlement on her behalf."

EEOC enforces Title VII of the Civil Rights Act of 1964, which prohibits employment discrimination based on race, color, religion, sex, and national origin; the Age Discrimination in Employment Act, which prohibits discrimination against individuals 40 years of age or older, sections of the Civil Rights Act of 1991; the Equal Pay Act; and Title I of the Americans with Disabilities Act. The San Francisco District's jurisdiction includes Northern and Central California, Hawaii, Guam, American Samoa, Wake Island and the Commonwealth of the Northern Mariana Islands.