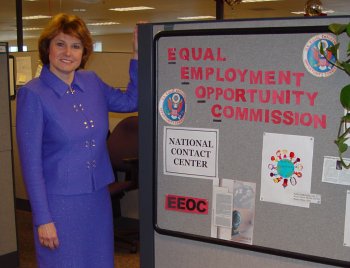 "The National Contact Center will help the EEOC serve the public better, faster and more efficiently," said Chair Dominguez at a kick-off event at the NCC complex in Lawrence, Kan. "By fielding requests and queries, the center will free mediators to mediate, investigators to investigate and litigators to litigate."

The public can reach the NCC toll free at 800-669-4000. The TTY number for individuals with hearing and speech impairments is 800-669-6820. The NCC will provide immediate access to customer service representatives in 150 languages between 8 a.m. and 8 p.m. Eastern Time. An automated system with answers to frequently asked questions will be accessible on a 24-hour basis, seven days a week.

Calls will be monitored for quality assurance and to track demographics, issues and concerns that will help shape the center's operations and future EEOC policy. Initially, the NCC will operate on an 18-month pilot basis. At the end of the pilot, a comprehensive independent analysis will determine whether the NCC should continue.

On Sept. 21, 2004, the EEOC awarded a contract to operate the NCC to Pearson Government Solutions, which has more than 20 years of experience operating contact centers for the federal government, as well as for state and local governments. With a corporate office headquartered in Arlington, Va., the company serves 27 government programs in five major contact centers in the United States. Further information about Pearson can be found on its web site at www.pearsongov.com.