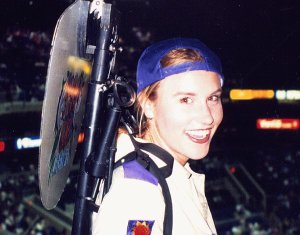 PHOENIX -- The U.S. Equal Employment Opportunity Commission (EEOC) today announced the resolution of a sex bias lawsuit against the Phoenix Suns Limited Partnership and Sports Magic Team, Inc. (SMT), an Orlando, Florida.-based sports entertainment firm, for over $100,000 and other relief on behalf of a former female employee, Kathryn Tomlinson, and other women who were discriminated against on the basis of gender when they were deprived of the opportunity to compete for positions with the Phoenix Suns' "Zoo Crew" entertainment troupe. The agreements are memorialized in two separate Consent Decrees, one for each Defendant, submitted to the United States District Court for Arizona for its approval.

The Zoo Crew provides entertainment during Phoenix Suns basketball games, including shooting T-shirts into the crowd with a giant toy bazooka, assisting with half-time promotions, and performing trampoline dunks with the Phoenix Suns gorilla, the team mascot. The troupe also participates in community events designed to promote the Suns.

According the EEOC, Charging Party Tomlinson performed well during her employment as a Zoo Crew member during the 1998-1999 season. The EEOC's suit, alleged that in 1999-2000, the Phoenix Suns and SMT adopted new sex-restrictive hiring policies for the Zoo Crew, limiting positions to "males with athletic ability and talent." This hiring policy was disseminated in the form job announcements posted around the Phoenix Metropolitan area and in a newspaper advertisement in several newspapers, including The Arizona Republic, Mesa Tribune, and The New Times.

Kathryn Tomlinson said, "I am disappointed that a well-known employer would engage in blatant discrimination. I know that standing up for myself and other women will make me a better person. I'd like to thank the EEOC."

EEOC Trial Attorney P. David Lopez stated that "under the terms of the Consent Decrees between the EEOC and the Suns and SMT, the Phoenix Suns will pay $82,500 to resolve claims brought on behalf of Kathryn Tomlinson and two other women and SMT will pay $22,000 to Kathryn Tomlinson and two other class members." He also said, "The Phoenix Suns also agreed to strengthen its policies prohibiting sex discrimination, to provide training to employees, supervisors, and management, to establish safeguards to ensure sex-restrictive advertisements are not disseminated in the future, and to send a letter of apology to Kathryn Tomlinson. The term of the Consent Decree with the Phoenix Suns is for three years."

Regional Attorney Mary Jo O'Neill remarked that, "The Commission is very pleased with the resolution of this case. Title VII prohibits sex-based recruitment and hiring practices unless the employer can demonstrate the sex restriction is a bona fide occupational qualification. The Commission will continue to combat antiquated sex restrictive policies that do not meet this requirement."