The U.S. Equal Employment Opportunity Commission (EEOC) today announced the settlement of a rare color harassment and retaliation lawsuit under Title VII of the Civil Rights Act of 1964 against Applebee's Neighborhood Bar & Grill, an international restaurant chain headquartered in Overland Park, Kansas.  The settlement provides $40,000 to Dwight Burch, an African American former employee who was discriminated against based on his dark skin color by a light skinned African American manager, and terminated when he complained to corporate headquarters.

The lawsuit was resolved through a Consent Decree filed with the U.S. District Court in Atlanta that sets forth the terms of the settlement (Case No. 1:02-CV-829).  In addition to the monetary relief for Mr. Burch, the Consent Decree requires training and reporting by Applebee's.  Prior to the lawsuit, Applebee's did not have a written policy in effect at any of its nationwide restaurants prohibiting discrimination based on color.  Applebee's now has amended its harassment and discrimination policies to include color as a protected basis in accordance with Title VII.  In both its Answer to the lawsuit and in the Consent Decree, Applebee's denies any liability or wrongdoing.

Mr. Burch filed a charge of discrimination with the EEOC alleging that the store manager, a light skinned African American, had consistently made derogatory remarks to him about his dark skin color, and had discharged him when he threatened to report the store manager's harassing remarks to Applebee's headquarters office.  Mr. Burch began working for Applebee's as a server at its Tara Boulevard, Atlanta, Georgia, location on December 16, 2000.  The store manager, assigned to the facility on January 1, 2001, terminated Mr. Burch on March 26, 2001 – less than 90 days after his arrival at the restaurant.

"I am grateful that the EEOC filed this lawsuit, not just for me but for other workers to," said Mr. Burch.  "I liked my job and got along well with everyone.  No-one should have to put up with mean and humiliating comments about the color of their skin on the job.  My  mother taught me that we are all God's children and each one of us is special.  It makes no difference that these comments are made by someone of your own race.  Actually, that makes it even worse.  That person should know better, especially if he is a manager."

The EEOC investigated Mr. Burch's allegations and concluded that there was probable cause to believe that the allegations were true.  The agency filed suit only after exhausting conciliation efforts to reach a voluntary pre-litigation settlement with the company.

Bernice Williams-Kimbrough, Director of the EEOC's Atlanta District Office, said: "We are pleased that Applebee's has agreed to resolve this case.  We are committed to fighting discrimination in all its forms, including issues of color harassment and retaliation for opposing unlawful practices.  It is very important that employees are able to engage in protected activity without fear of retaliation.  It is equally important that employers realize that 'color' is a separate protected basis under Title VII.  Employers violate federal law when they discriminate based on color, including the harassment of employees because of their respective skin colors." 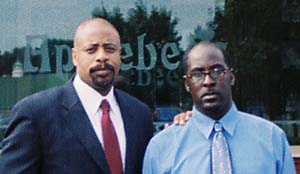