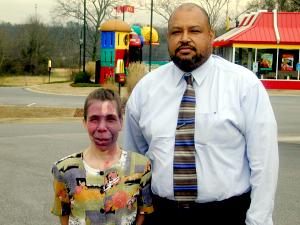 "All I ever wanted was a shot at the American Dream,"
says Charging Party Samantha Robichaud,
pictured with EEOC Birmingham Trial Attorney Mason
Barrett in front of the McDonald's Restaurant
in Northport, Alabama.

NORTHPORT, Ala. -- The U.S. Equal Employment Opportunity Commission (EEOC) today announced the filing of an employment discrimination lawsuit under the Americans with Disabilities Act of 1990 (ADA) and the Civil Rights Act of 1991 against R.P.H. Management, Inc., doing business as McDonald's restaurant in Northport, Alabama. The suit says that McDonald's discriminated against Samantha Robichaud when it denied her the opportunity for promotion to a management position and constructively discharged her due to a cosmetic disfigurement known as Sturge Weber Syndrome.

Ms. Robichaud, who has a "Port Wine Stain" covering a significant portion of her face, began her employment with McDonald's as a cook. Her acceptance of that position was premised upon the assurance that she would have the opportunity for promotion to management. In order to be eligible for a management position, an employee must show proficiency in handling several areas of the restaurant, including the front counter serving customers. Ms. Robichaud was removed from the front counter because of her appearance. Ms. Robichaud was later constructively discharged when she was told that she would never be promoted to a management position because of her appearance.

"All I ever wanted was a shot at the American dream," Ms. Robichaud said. "McDonald's took that away from me."

The suit (EEOC vs. R.P.H. Management, Inc., d/b/a McDonald's, Civil Action No. 03-RRA-502-J) is before Magistrate Judge Robert R. Armstrong, Jr. in the U.S. District Court for the Northern District of Alabama. The EEOC's Birmingham District Office filed the suit after the agency investigated the charge, determined it was meritorious, and exhausted its conciliation efforts to reach a voluntary pre-litigation settlement with the company.

"By filing this lawsuit, the EEOC is demonstrating its commitment to enforcing laws established to prevent disability-based discrimination," said Cynthia G. Pierre, District Director of the EEOC's Birmingham District Office. "Ms. Robichaud is a very brave individual who came to the EEOC for assistance when she believed she was being judged not by her performance but because of a medical condition that affects how she looks. This is the first lawsuit EEOC has filed in Alabama involving facial disfigurement, but we believe it is important to educate employers that the ADA requires a focus on what people can do, not how they are perceived."

Charles E. Guerrier, Regional Attorney for the EEOC's Birmingham office, said: "Unfortunately, myths, fears and stereotypes continue to operate in the workplace to deny full employment opportunities to individuals with disabilities. One of the worst types of discrimination occurs when an individual with a cosmetic disfigurement is denied a job because of the unjustified belief that customers will be offended simply by seeing that person. The opportunity to make a living and succeed in the workplace is not restricted to models and movie stars but is the promise held out to every person with talent, skills and ambition. Ms. Robichaud is a qualified individual who deserved better."