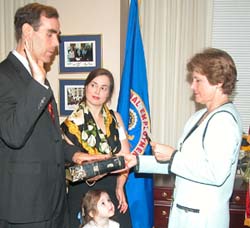 Eric Dreiband was sworn in today as General Counsel of the U.S. Equal Employment Opportunity Commission (EEOC) for a term of four years. Dreiband, most recently Deputy Administrator for Policy in the U.S. Department of Labor's Wage and Hour Division, was nominated by President Bush on February 4 and unanimously confirmed by the U.S. Senate on July 31.

"We are very fortunate to have Eric Dreiband as the Commission's General Counsel. Eric brings impeccable credentials to his new role," said EEOC Chair Cari M. Dominguez. "Most importantly, he brings a strong personal commitment to making the principle of equal employment opportunity a reality for all."

"I am pleased and proud to be working with Chair Dominguez on her vision for a discrimination-free workplace  an even playing field for every American worker," said Dreiband. "The EEOC has been working hard for employment justice for 38 years now, and I am both proud and humbled to be a part of that crucial mission."

Before working for the Labor Department, Dreiband worked with the Chicago law firm of Mayer, Brown, Rowe and Mawe, where he litigated cases before state and federal trial courts, appellate courts, and administrative agencies throughout the United States. Dreiband's cases included labor and employment, consumer fraud, computer fraud, internet disputes, class actions, commercial disputes, and criminal cases. His areas of practice included Title VII of the Civil Rights Act of 1964, the Americans With Disabilities Act, the Age Discrimination In Employment Act, the Fair Labor Standards Act, the Equal Pay Act, and the Occupational Safety And Health Act. Dreiband also worked as a federal prosecutor in Little Rock, Ark., and in Washington, D.C. in the Office of Independent Counsel.

Born and raised in Indianapolis and Fort Wayne, Ind., Dreiband graduated from Princeton University with an undergraduate degree in history. Dreiband earned a Master of Theological Studies Degree from Harvard University, where he concentrated in ethics and public policy and studied at Harvard's Divinity School, Kennedy School of Government, Graduate School of Education, and Graduate School of Arts and Sciences.

Dreiband received his law degree with honors from the Northwestern University School of Law. During law school, Dreiband served as an Articles Editor of the Northwestern University Law Review. Following law school, Dreiband clerked for the Honorable William J. Bauer of the United States Court of Appeals for the Seventh Circuit.