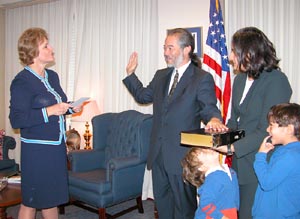 Stuart J. Ishimaru is sworn in as an EEOC Commissioner by Chair Cari M. Dominguez, as his wife and children look on.

Commission Has Full Five Members For First Time Since 1996

WASHINGTON - Stuart J. Ishimaru was sworn in today as a Commissioner of the U.S. Equal Employment Opportunity Commission (EEOC), bringing the bi-partisan panel to its full five-member status for the first time in seven years. Mr. Ishimaru was nominated by President Bush on October 14, 2003, and unanimously confirmed by the full U.S. Senate on October 31 to fill the remainder of a five-year term expiring in July 2007.

"In his varied and distinguished career, Stuart Ishimaru has demonstrated a lifelong commitment to equal opportunity and civil rights," said EEOC Chair Cari. M. Dominguez. "We are delighted to have his many talents committed to furthering the mission of our agency. We welcome Commissioner Ishimaru and look forward to working with him."

Mr. Ishimaru joins Chair Dominguez, Vice Chair Naomi C. Earp, and Commissioners Leslie E. Silverman and Paul Steven Miller on the five-member Commission. Commissioners are appointed for five-year, staggered terms with the President designating a Chair as the chief executive officer of the Commission, as well as a Vice Chair. The five-member Commission makes equal employment opportunity policy and approves most litigation in consultation with the General Counsel (also a presidential nominee). The current General Counsel is Eric Dreiband.

"I am honored and excited to be joining the Commission," said Mr. Ishimaru. "For nearly 40 years the EEOC has been at the forefront of our nation's commitment to root out illegal discrimination. I look forward to working with my colleagues at the Commission to make this vision a reality."

In 1993, Mr. Ishimaru was appointed by President Clinton to be the Acting Staff Director of the U.S. Commission on Civil Rights, and from 1984 to 1993 served on the professional staffs of the House Judiciary Subcommittee on Civil and Constitutional Rights and two House Armed Services Subcommittees of the U.S. Congress. A native of San Jose, Calif., he received his undergraduate degree from the University of California, Berkeley, and his law degree from the George Washington University.