WASHINGTON — Jacqueline A. Berrien, the former Associate Director-Counsel of the NAACP Legal Defense and Educational Fund (LDF), was sworn in today as the Chair of the U.S. Equal Employment Opportunity Commission (EEOC)  by Acting Chairman Stuart J. Ishimaru. She becomes the fourteenth Chair of the EEOC, which will celebrate the 45th anniversary of its founding in July.

Berrien was nominated on July 16, 2009 by President Barack Obama, who signed a recess appointment for her on March 27, 2010.  She will serve until the end of the Congressional session in 2011 unless she is confirmed by the by the Senate for a full term.

During her more than twenty years of law practice, Berrien has been devoted to public service and addressed a wide variety of civil and constitutional rights issues. Throughout her career, she has represented clients in cases concerning subjects as varied as pregnancy discrimination, employment discrimination on the basis of immigration status, voting rights, and access to affordable housing.  She comes to the EEOC after five and a half years as a leader of LDF's national legal advocacy and scholarship programs. She also has taught in trial advocacy programs at Fordham and Harvard law schools and served on the adjunct faculty of New York Law School.

A native Washingtonian who has lived most recently in Brooklyn, N.Y., Berrien's commitment to public service is longstanding.  She paid part of her college tuition by working for federal and local government agencies, starting at the bottom of the federal pay scale during her senior year of high school.  She earned her undergraduate degree from Oberlin College and in her junior year was awarded the Harry S. Truman Scholarship in recognition of her leadership potential and commitment to a career in public service.  She received her law degree from Harvard Law School, where she served as a General Editor of the Harvard Civil Rights-Civil Liberties Law Review.  She began her legal career clerking for Judge U.W. Clemon, the first African-American appointed to the U.S. District Court in Birmingham, AL.

"I am confident that I am here because many people who lived before I was born were determined that I should have opportunities that they could only witness in dreams and articulate in prayers," Berrien said.  "I am motivated by the knowledge that the entire nation will benefit as we move closer to fulfilling the mission that guides the EEOC: to end unlawful discrimination in the nation's workplaces.  I welcome the opportunity to work with anyone, within or outside the EEOC, who is determined to fulfill the agency's mission." 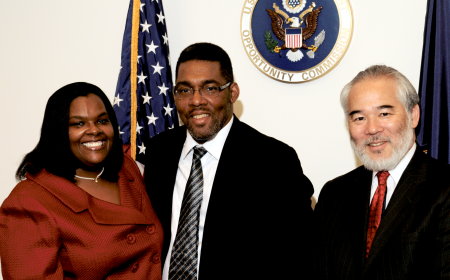