Monday’s ceremony marked the EEOC leaders’ official public installations, though they have each been serving for several weeks.  Chair Earp and Vice Chair Silverman, who were already members of the Commission, were designated to their new posts by President Bush.  General Counsel Cooper, who had previously worked in private practice, was nominated by the President and unanimously confirmed by the Senate.

“I have nothing but the greatest affection for the EEOC, and for all my friends here,” said Justice Thomas, who was greeted at EEOC headquarters by throngs of former colleagues.  “I still count my years here as the most formative of my career, and perhaps my life.  I’ve been asked on any number of occasions, what was the best preparation for being on the Supreme Court?  And, invariably, my answer is, my years at the EEOC.  It was the best training for what we do today. . . During those times, we made decisions that actually mattered; they changed the agency or changed people’s lives, and affected people’s lives.”

Justice Thomas is the longest-serving Chairman in the 41-year history of the EEOC, leading the Commission from 1982-1990.  Upon leaving the Commission, he became a Judge of the U.S. Court of Appeals for the District of Columbia Circuit in 1990.  President George H. W. Bush nominated him as an Associate Justice of the Supreme Court, and he took his seat on Oct. 23, 1991.

Chair Earp, who served as an attorney-adviser to Chairman Thomas in the mid-1980s, said, “We are honored that Justice Thomas was able to participate in today’s ceremony.  As Chair, I plan to build upon the solid foundation established by previous Chairs, Commissioners, and staffers, while also developing new strategies to address the complexities of the twenty-first century workplace.  I look forward to tackling the challenges and opportunities that lie ahead with the assistance of my fellow Commissioners, headquarters and field staff, and Commission stakeholders.”

Vice Chair Silverman said, “As a nation, we have made tremendous progress in the field of civil rights over the past forty years.  However, much work remains.  The changing nature of discrimination and changing workforce demographics present new challenges for the country and the Commission.  I look forward to working with my colleagues as we address these challenges.”

Mr. Cooper said: “I am honored to serve as General Counsel for an agency that I have deeply respected throughout my career.  The Commission’s renewed focus on systemic discrimination will enable us to leverage our resources most effectively to ensure equal employment opportunities throughout the nation.”

Between April 2003 and Sept. 1, 2006, Ms. Earp served as Vice Chair of EEOC.  During that time, she created and launched the EEOC's Youth@Work Initiative, a national education and outreach campaign to promote equal employment opportunity for America's newest generation of workers.  To date, the EEOC has held more than 1,800 Youth@Work events nationwide, reaching more than 128,000 students, education professionals, and employers.

Chair Earp brought to the EEOC hands-on leadership and management experience, a strong track record of promoting diversity, and expertise in the equal employment opportunity (EEO) field.  Her work experience in promoting diversity in EEO includes a series of progressively responsible leadership positions with various federal agencies, including the National Institute of Standards and Technology, the National Institutes of Health, the Federal Deposit Insurance Corporation, and the U.S. Department of Agriculture.  She is actively involved with the Labor and Employment Section of the American Bar Association.

The office of EEOC Vice Chair became vacant in September when President Bush elevated then-Vice Chair Earp to Chair.  As a member of the Commission, Vice Chair Silverman led the EEOC’s Systemic Task Force, which examined the EEOC’s efforts at combating systemic discrimination.  In April 2006, the Commission unanimously adopted the Task Force’s major recommendations aimed at improving the EEOC’s systemic program.  In addition, Vice Chair Silverman has been active in the EEOC's mediation program.  In partnership with the American Bar Association, she led an effort to expand and enhance the program.

Mr. Cooper was most recently employed as a partner in the Washington D.C. office of Steptoe & Johnson LLP., where he had specialized in employment litigation for more than 34 years.  He primarily represented employers at the trial and appellate level in litigation throughout the country including cases brought under Title VII, The Age Discrimination in Employment Act, The Equal Pay Act, The Americans with Disabilities Act and The Fair Labor Standards Act.  He also represented employers with respect to claims brought under state and local laws, and represented both employees and employers in restrictive covenant and executive compensation cases.

In addition to Chair Earp and Vice Chair Silverman, the other sitting members of the Commission are Commissioners Stuart J. Ishimaru and Christine M. Griffin. The fifth Commissioner seat is currently vacant.

“I would encourage you all as you leave the agency,” the Justice exhorted current EEOC employees, “that you just continue in the spirit of just being fair to people.  People will second-guess the policy decisions, but the one thing we tried to do both inside and outside is simply to be fair to people.  I think if we just try to be fair it will all work out.”

EEOC enforces federal laws prohibiting employment discrimination.  Further information about the Commission is available on its web site at www.eeoc.gov. 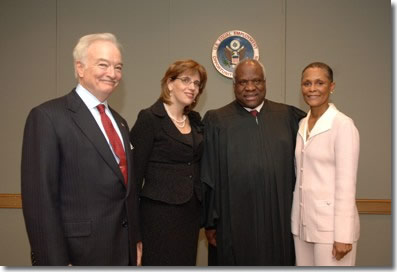