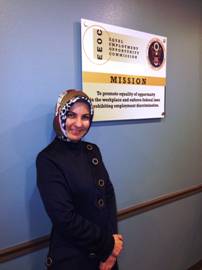 ALBUQUERQUE, N.M. - 704 HTL Operating, LLC and Investment Corporation of America, doing business as MCM Elegante Hotel in Albuquerque, has agreed to settle a religious discrimination lawsuit filed by the U.S. Equal Employment Opportunity Commission (EEOC) for $100,000 and other relief, the agency announced today.

The settlement resolves an EEOC lawsuit filed on Sept. 21, 2011, EEOC v. 704 HTL Operating, LLC, and Investment Corporation of America, d/b/a MCM Elegante, 11-cv-00845 JCH/LFG, for alleged religious discrimination against Safia Abdullah, who was hired for a housekeeping position at the hotel. The EEOC's lawsuit charged that this employer would not allow Abdullah to work unless she removed her religious head covering, and fired her when she declined to do so.

Such alleged conduct violates Title VII of the Civil Rights Act of 1964, which makes it unlawful to refuse to hire or discharge any applicant or employee because of religion or religious practices including requesting religious accommodation. The law further provides that employers have a duty to provide reasonable accommodation for sincerely held religious beliefs and practices of applicants and employees, unless doing so would cause an undue hardship. Such accommodations, for example, may include allowing individuals to wear religious clothing or take time off for religious observances.

The EEOC filed suit in U.S. District Court for the District of New Mexico after first attempting to reach a pre-litigation voluntary settlement through its conciliation process. The case was set for trial to commence on Dec. 2, 2013.

In addition to monetary relief for Ms. Abdullah, the consent decree settling the suit provides for other important relief, including an injunction prohibiting future discriminatory practices; institution of policies and procedures to address religious discrimination and retaliation; training for employees of MCM, and managers and human resource officials of both defendants on religious discrimination; and posting a notice advising employees of their rights under Title VII.

"Employers should be aware that they have a duty to provide reasonable accommodation to employees' religious beliefs and practices," said Regional Attorney Mary Jo O'Neill of the EEOC's Phoenix District Office, which has jurisdiction over Arizona, Colorado, Wyoming, New Mexico and Utah. "Wearing a religious head covering is a common religious practice which employers can usually accommodate without any undue hardship."

EEOC Area Director Derick Newton of the Commission's Albuquerque office said, "Religious discrimination continues to be a high priority for the EEOC, and we take this issue very seriously."