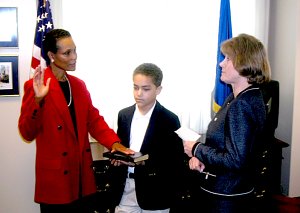 WASHINGTON - Naomi C. Earp was sworn in today as a member of the U.S. Equal Employment Opportunity Commission (EEOC), serving in the capacity of Vice Chair, to fill the remainder of a five-year term expiring July 1, 2005. President Bush signed the recess appointment of Ms. Earp last week on April 22. Under the recess appointment, she will serve until the end of the 108th Congress unless she is confirmed by the Senate in the interim. The President nominated Ms. Earp on November 27, 2001, and again on January 9, 2003.

"Our new Vice Chair is no stranger to the Commission, having served here earlier in her career," said EEOC Chair Cari M. Dominguez today during a swearing-in ceremony at agency headquarters. "Naomi Earp brings to the agency a wealth of EEO expertise, as well as hands-on leadership and management experience. She has a strong track record in promoting diversity in both the private and federal sectors. My fellow Commissioners and I extend a warm welcome to our new Vice Chair and look forward to her contributions."

Ms. Earp's work experience in promoting diversity and EEO includes a series of progressively responsible leadership positions in the federal government with various agencies, including the National Institute of Science and Technology, the National Institute of Health, the Federal Deposit Insurance Corporation, and the U.S. Department of Agriculture. At NIH, she spearheaded the development of a world-class diversity initiative and a nationally-recognized Alternative Dispute Resolution program. Ms. Earp also served as an Attorney Advisor at the EEOC during the mid-1980s. In addition, she has worked as an independent consultant providing services to private employers and public agencies on a variety of employment-related issues and programs. Her educational background includes a law degree from Catholic University, a masters degree in education from Indiana University, and bachelor's degree from Norfolk State University.

Ms. Earp joins Chair Dominguez and Commissioners Paul Steven Miller and Leslie E. Silverman on the five-member Commission, with one seat remaining vacant. Further information about the Commission is available on its web site at www.eeoc.gov.