P. David Lopez Sworn in as General Counsel of the EEOC

PHOENIX—David Lopez, a 15-year agency veteran, was sworn in today as General Counsel of the U.S. Equal Employment Opportunity Commission (EEOC), in a ceremony at the agency's Phoenix District Office. He becomes the first General Counsel to be appointed from the ranks of field attorneys.

Lopez was nominated for the post by President Barack Obama on Oct. 22, 2009, and received a recess appointment to the post on March 27, 2010. He will serve at the EEOC's Washington headquarters until the end of the Congressional session in 2011, absent confirmation by the Senate.

"I am delighted to have an attorney with David's extensive knowledge of the law and familiarity with the EEOC's legal program as General Counsel," said EEOC Chair Jacqueline A. Berrien. "He will be a valued partner in our vital mission of eradicating employment discrimination."

"I feel very honored by President Obama's appointment and view it as an affirmation of support for the EEOC staff in the field fighting every day to vindicate civil rights and preserve the promise of this great country," Lopez said. "I intend to further develop the national law firm model for the EEOC to combat discrimination. I look forward to working with Chair Berrien and the entire Commission to ensure equal opportunity throughout this nation."

Lopez began his career at the EEOC working for former Chairman Gilbert Casellas as a Special Assistant in Washington. For the past 12 years, he has served as a Senior Trial Attorney and a Supervisory Trial Attorney in the EEOC's Phoenix District Office. There, he has been responsible for successfully litigating many high-profile cases on a wide variety of legal bases. He has tried several cases to verdict in jury trials involving disability discrimination, sexual harassment, race discrimination and harassment, national origin and retaliation, gender wage discrimination, and religious discrimination.

In particular, Lopez was lead counsel in EEOC v. Alamo Rent-A-Car, CIV 02-1908-PHX-ROS, a post 9/11 religious discrimination case, where a jury entered a verdict against Alamo for $287,640, $250,000 of which were punitive damages. Lopez has also litigated and resolved cases on behalf of the EEOC and victims of discrimination under all of the statutes and bases enforced by the EEOC, including the ADEA.

Before joining the Commission, Lopez served in the Employment Litigation Section of the Civil Rights Division of the U.S. Department of Justice from 1991 to 1994. From 1988 to 1991, he was an associate with the law firm of Spiegel and McDiarmid in Washington, DC. 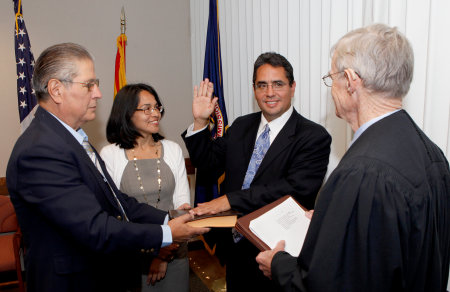