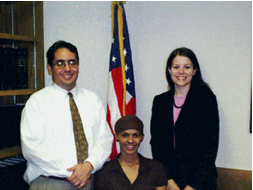 PHOENIX  A Phoenix jury has awarded more than $287,000 in a religious discrimination suit against Alamo Car Rental brought by U.S. Equal Employment Opportunity Commission (EEOC), the agency announced today. The EEOC had charged Alamo committed post-9/11 backlash discrimination based on religion when it fired a Somali customer sales representative in December 2001 for refusing to remove her head scarf during the Muslim holy month of Ramadan.

Alamo will pay $21,640 in back pay, $16,000 in compensatory damages, and $250,000 in punitive damages to Bilan Nur. According to the EEOCs lawsuit (CIV 02-1908-PHX-ROS in U.S. District Court for the District of Arizona), Alamo refused to permit Nur to continue to cover her head, as she had done in previous years, even if she wore an approved Alamo-logo scarf. The jury also heard evidence that, although wearing a head scarf did not violate the companys dress policy, Alamo fired Nur in December, 2001, only eight days before Ramadan was over, and declared her ineligible for rehire. The jury reached its verdict after also hearing testimony about the damages Nur, who was 22 years old at the time, suffered as a result of being fired.

Title VII of the Civil Rights Act of 1964 prohibits employers from discriminating against individuals because of their religion in hiring, firing, and other terms and conditions of employment. Employers must reasonably accommodate employees' sincerely held religious beliefs or practices unless doing so would impose an undue hardship on the employer.

In the first post-9/11 backlash case brought by the EEOCs Phoenix District Office, Judge Roslyn Silver took the unusual step of finding the religious discrimination so clear-cut, based on the pleadings, that the question of whether Alamo had violated the law did not need to be resolved by a jury. In the subsequent trial, which began on May 29, the jury was only asked to decide the amount of monetary damages to which Nur was entitled.

For nearly six years, Alamo has continued to deny that it violated the law when it refused to accommodate Ms. Nurs religious beliefs and fired her, said Mary Jo ONeill, regional attorney for the EEOC Phoenix District Office. Judge Silver had already disagreed with Alamo, as did the jury with its award today. Title VII protects people of all religious beliefs, and no one should ever have to sacrifice her religious beliefs in order to keep a job.

According to EEOC Phoenix District Director Chester Bailey, Employers need to remember that Title VII protects the religious practices and beliefs of all employees regardless of the nature of their faith.

EEOC trial attorney David Lopez, who tried this case with Valerie Meyer, said after the verdict, Bilan Nur is truly a remarkable woman. A refugee from war-torn Somalia when she came to this country as a young woman, Ms. Nur viewed America as the country that offered her hope, safety, and equality. With the jurys findings today, Ms. Nur has been reassured that, even after 9/11, Americans still believe in justice for all people. Ms. Nur and the EEOC are both very pleased with todays results. We hope this verdict sends a message to the community that this community will not accept religious intolerance in the workplace.

The EEOC is the federal government agency that enforces the nations anti-discrimination laws in the workplace based on race, color, sex (including sexual harassment and pregnancy), religion, national origin, retaliation, age and disability. Further information about the Commission is available on the agencys web site at www.eeoc.gov.