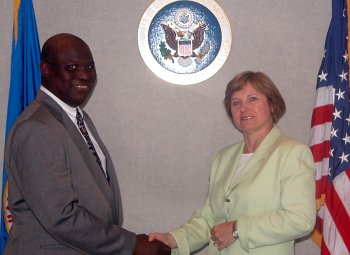 As part of the White House Initiative on Historically Black Colleges and Universities, the EEOC's Office of Research, Information and Planning (ORIP) implemented the fellowship in 2004 to develop techniques for knowledge transfer. While in residence, the fellow will conduct research, use the agency's data and facilities, and work with colleagues in ORIP as well as serve clients within EEOC headquarters and field offices. The fellow benefits by conducting program research and learning methodologies for developing statistical evidence of discrimination for large-scale class investigations. The EEOC benefits by adding a skilled researcher with a fresh perspective to its investigating team.

Dr. Kuforiji has received three economics degrees: a B.S. in 1977 and an M.S. in 1979 from the University of Ibadan, Nigeria, and a Ph.D. from the University of Pittsburgh in 1987. Among Dr. Kuforiji's research interests are his development of a "bench-mark tool or index proxy" for measuring employment diversification, and the transition of youths from college to the workplace. Also, Dr. Kuforiji will be using the EEOC's EEO-3 survey data for a research study: Referral Unions: Impacts on Women and Minorities.

"We at Tuskegee University are very pleased that Dr. Kuforiji was selected as the 2005 Labor Economist Fellow to partner with the EEOC to do research on the crucial issues of employment diversification and college students' employment," said Alicia Jackson, Dean of Tuskegee's College of Business and Information Sciences. "We hope that his research and findings will assist policymakers in identifying what is or isn't working in resolving employment disparity issues in our country. Since Dr. Kuforiji is our second faculty member to be selected for this program, we hope to continue this cordial relationship with the EEOC for a long time."

Tuskegee University is an independent and state-related institution of higher education. Its programs serve a student body that is coeducational as well as racially, ethnically and religiously diverse. Tuskegee University was the first black college to be designated as a Registered National Historic Landmark (April 2, 1966), and the only black college to be designated a National Historic Site (October 26, 1974). Further information is available on its web site at www.tuskegee.edu.