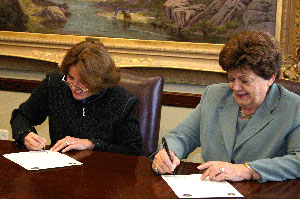 SALT LAKE CITY - In an open press meeting at the state capitol on Wednesday, November 10, at noon, Governor Olene S. Walker and U.S. Equal Employment Opportunity Commission (EEOC) Chair Cari M. Dominguez will sign a joint resolution aimed at enhancing state government employment opportunities for individuals with disabilities nationwide. By this agreement, the State of Utah and the EEOC will jointly review Utah's recruitment, hiring, and reasonable accommodation programs to identify best practices worthy of emulation by other states.

Utah is one of 11 states to join the EEOC in this pioneer project to further advance the New Freedom Initiative - President George W. Bush's comprehensive program to fully integrate the nation's 54 million individuals with disabilities into all aspects of American life. The Commission's role will include consultation, outreach, and technical assistance. Last month, the EEOC issued an interim report detailing best practices found in the first four states reviewed - Florida, Maryland, Vermont and Washington. The EEOC plans to issue a final report next October outlining best practices and potential barriers to employment nationwide. Other current partners in this effort are Kansas, Missouri, New Mexico, New Hampshire, North Carolina and Texas.

"The Commission is honored to have the State of Utah as a partner in this project," said Chair Dominguez. "Utah demonstrates its leadership in advancing the employment of Americans with disabilities through this effort. We look forward to a collaborative exchange for the benefit of our entire nation."

"I am pleased Utah is participating in the New Freedom Initiative," said Governor Walker. "We are committed to improving the quality of life for all Utahns, including those with disabilities, and I believe providing equal employment opportunities is a wonderful and necessary step to ensuring lifelong success."