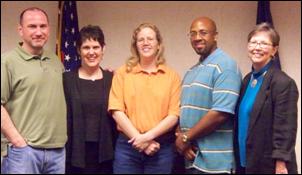 DENVER  The Vail Corporation, which operates ski resorts in Vail and Keystone, Colo., will pay $80,000 and furnish other relief to settle a religious and gender discrimination lawsuit filed by the U.S. Equal Employment Opportunity Commission (EEOC), the agency announced today.

According to the EEOCs lawsuit, EEOC v. The Vail Corporation, 07-cv-02035-REB-KLM, Lisa Marie Cornwell, an emergency services supervisor at the Keystone Resort, was subjected to harassment based on her Christian religion and her sex, denied religious accommodation and treated less favorably than her male colleagues. The EEOC said that Cornwells supervisor, Rick Garcia, forbade her and another Christian employee from even discussing their Christian beliefs with one another while at work, and would not allow them to listen to Christian music while on duty, because it might offend other employees, but had no similar restrictions on music with profanity or lyrics promoting violence against women, which were offensive to Cornwell.

Additionally, according to the EEOC, Garcia ridiculed Cornwell for asking for scheduling accommodation so that she could attend her preferred religious services, and denied her requests while scheduling lower ranking officers for the shifts she requested. Also, Garcia created and tolerated a sexually hostile work environment where he and other male employees made offensive sexual comments and jokes in the workplace, the EEOC alleged.

Cornwell complained to various Keystone managers and human resource staff about the harassment and being scheduled to miss her religious services on Sundays, but no action was taken to resolve the problems. EEOC alleged that Cornwell was fired in retaliation for her last complaint, made less than ten days before her termination.

Title VII of the Civil Rights Act of 1964 requires that employers provide reasonable accommodation for the religious practices and beliefs of employees. According to the EEOC, Cornwell could have been scheduled so that she could attend her religious services, without any cost or disruption to Vails business operations, and the company was required by law to make some such accommodation. Also, Title VII prohibits workplace harassment based on religion or gender. The EEOC filed suit after first attempting to reach a voluntary settlement.

Under the settlement, Vail will pay Cornwell $80,000 and provide training for all of its Keystone employees on religious accommodation and prohibited harassment and retaliation.

Title VII imposes an affirmative obligation on employers to accommodate employees religious practices and beliefs when possible. When Congress added this provision to the statute, they expected employers to cooperate with employees to work out some reasonable accommodation. The environment in this case, where the employee was not only flatly denied accommodation, but also ridiculed for even asking, is unacceptable, emphasized Regional Attorney Mary Jo ONeill of the EEOCs Phoenix District Office, whose jurisdiction includes Colorado.

EEOC Denver Field Director Nancy Sienko added, Claims of religious discrimination have increased by more than 80 percent in the last ten years. We are seeing more and more of these cases, and have litigated several in the last few years. The EEOC will continue to vigorously enforce the statutes prohibiting this behavior.

Ms. Cornwell said, I am particularly pleased about Vails agreement to conduct training on religious accommodation to help ensure that future employees will not be discriminated against in the same manner.