African-Americans in the American Workforce

As part of the Equal Employment Opportunity Commission's (EEOC) year-long 50th anniversary celebration, the agency has released American Experiences versus American Expectations, a report that illustrates the significant changes to the demographics of the American workforce since EEOC opened its doors in 1965. The report, which also highlights continuing challenges in our workforce demographics, uses EEO- 1 data to track employment participation from 1966 to 2013 for several demographic groups, including African-Americans.

Beginning in 1966, all employers with 100 or more employees (lower thresholds apply to federal contractors) have been required by law to file an annual Employer Information Report EEO-1 with EEOC.  In fiscal year 2013, the most recent year for which data is available, approximately 70,000 employers filed reports indicating the composition of their workforce by sex, race/ethnicity, and major job categories. (For more information about the EEO-1 and job categories, please see http://www.eeoc.gov/employers/eeo1survey/index.cfm.) 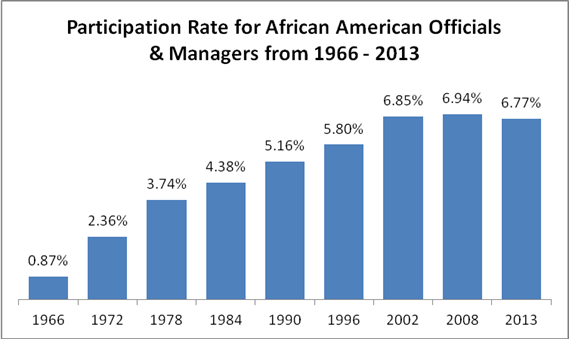 By comparison, between 1966 and 2013, overall African-American participation rates in the workforce increased from 8.2 percent to 14 percent (2013 EEO-1 Indicators report). In 2013, the United States' 45 million African Americans made up roughly 13 percent of the population.  Despite the gains in employment made by African-Americans in the last 50 years, the annual median income of African-American households in 2012 was $33,321, compared with the national median at $51,017.

EEOC is responsible for enforcing, among other laws, Title VII of the Civil Rights Act of 1964, which prohibits discrimination based on race or color in any aspect of employment. In FY 2014, race discrimination remained the most frequent ground for discrimination alleged under Title VII, comprising 35 percent of the charges filed with EEOC under all the statutes the agency enforces. Of these charges, African-Americans filed 25,482.  The issues most frequently alleged in these charges were discharge, terms and conditions of employment, and harassment.

Through its 53 offices nationwide, EEOC works to stop and remedy racial barriers to equal employment opportunity such as hiring discrimination and harassment. During FY 2014, EEOC staff resolved 30,429 charges of employment discrimination based on race and recovered nearly $75 million for individuals along with substantial changes to employer policies to remedy violations and prevent future discrimination-without litigation. In one notable resolution from a year earlier, EEOC reached a voluntary agreement for $21.3 million and significant non-monetary relief after African-American workers filed 78 charges of racial discrimination against an employer.

When litigation has been necessary, EEOC has obtained compensation for victims as well as vital changes to discriminatory practices at issue. For example, last year the agency settled EEOC v. McCormick & Schmick for approximately $1.3 million and significant changes in the restaurant chain's recruitment, hiring, and work assignments to ensure its employment practices do not discriminate in the future.  EEOC had alleged that the nationwide seafood restaurant chain refused to hire African Americans into positions that would interact with the public-- known as "front-of-the-house" positions-at its Baltimore restaurants. The case involved approximately 200 individuals.

Other noteworthy cases include the following: