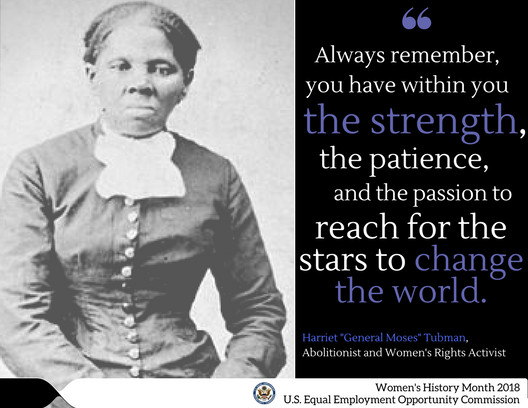 Sometime in the 1830s, a slaveowner on Maryland's Eastern Shore threw a heavy metal weight at a slave.  He missed his target and hit another slave - a young girl named Araminta "Minty" Ross.

That injury caused Minty a lifetime of seizures, headaches and visions.  However, it didn't stop her.  Minty Ross, later known as Harriet Tubman, would show the world what pure courage looks like.  When she was 27, braving the horrors that threatened a fugitive slave, she escaped under the cover of night to Philadelphia and freedom.

That was just the beginning of Harriet Tubman's heroic path.  In defiance of the human instinct for self-preservation, she went back to Maryland to lead other enslaved people to freedom.  First her own relatives.  Then others.  Again and again, she traveled back into slave territory to lead more and more groups of African-Americans to liberty.

In the annals of the Underground Railroad, Tubman was not only one of the best conductors, she was one of the prime trailblazers.  Her admirers gave her a new moniker: General Moses.  Harriet made an incredible 13 trips to lead about 70 people to the Promised Land - and she never lost a "passenger."  One can only imagine what would have happened to her had she been caught.  That danger didn't stop her.  Nothing stopped her. She persisted.

During the Civil War, "General Moses" lived up to her nickname - she served the Union army and its cause as a scout, a spy, a recruiter, soldiers' nurse, and even a fighter. In 1863, she became the first woman to lead an armed expedition in the Civil War and liberated more than 700 slaves.

While her efforts to free slaves are legendary, her efforts to advance women's rights are lesser known.  After the war, among her other endeavors, Tubman worked to promote the cause of women's rights, especially the right to vote. When asked whether she truly believed in women's suffrage, Tubman replied: "I suffered enough to believe it." Whether or not she intended the play on words, Tubman worked alongside women's rights leaders such as Susan B. Anthony to move America that much closer to realizing its ideals.

It's all about human rights for all of us.  Women like Harriet Tubman with prodigious bravery, and a heart to match, understood that.  The National Women's History Project honors similar women in our own time.  Just looking at this year's honorees alone reveals the scope of courageous women's struggles for justice in so many areas of life.

March is Women's History Month, and paying a visit to the new Harriet Tubman Underground Railroad Visitor Center in Dorchester County, Maryland (not far from the EEOC's Baltimore Field Office) -  the heart of Tubman country - would be a fine way to celebrate it.  There you will learn, or be reminded of, how Harriet Tubman was inspired on her career as a deliverer of enslaved people - and how she did it.  Just last week at EEOC's headquarters, as part of our Black History Month recognition, we were able to hear a presentation by Deanna Mitchell, the first superintendent of this new site as part of the National Park Service.

One of General Moses's most practical - and poetic - tactics was to follow the North Star.  Keep following it, and it will lead you to freedom.

The North Star is still about navigation and guidance.  Our challenges remain, and the problem of job discrimination - and the prejudice behind it - are everywhere.  There are many challenges to human freedom and dignity.  Especially vexing right now is the outrage of sexual harassment, which, incredibly, seems to continue on its stubborn, nasty way - as we, mustering our own stubborn­ness, keep fighting it.

Our North Star at the EEOC - and as Americans - is the guiding light in our hearts and consciences that leads us to help others on their own treks to liberty, opportunity, and justice.